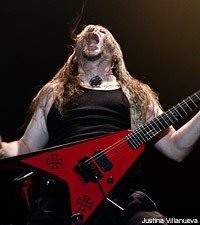 "You guys ready for Vader to f---ing kick your ass?" Decrepit Birth frontman Bill Robinson got the audience at Gramercy Theater really riled up just before Vader took the stage.

Eight albums in 26 years is a whole lot of history for a Polish death metal band. When Vader played New York City on Nov. 7, the band proved that death metal ages just fine.

"You want some blood? You got it," Vader founding member Peter Wiwczarek told the packed venue. With a sound more intimidating than any fictional villain, Vader played a lengthy set with smiles the whole way.

A row of tour vans lined Lexington Avenue. The veteran death metallers brought along a slew of bands with them to New York City that included Rose Funeral, Augury, the Amenta, Warbringer and Decrepit Birth.

"See you next time New York," Wiwczarek shouted before walking off stage with the rest of the band, but the crowd did not fall for their trick. The strong stage lights were still up when all of Gramercy Theater chanted "Vader" until the band returned for an encore.

Vader's latest release, 'Necropolis,' is out now via Nuclear Blast. The band will be touring the U.S. and Canada through December. You can catch them with black metallers Marduk when they tour southern Europe together in January.