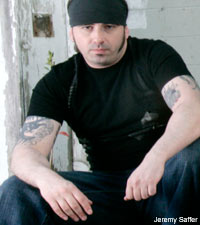 It seems they don't call Unearth bassist John 'Slo' Maggard 'Slo' for nothing. The cardinal rule of 'Your iPod is Showing' is no cheating. Guilty pleasures and fluke embarrassments are just as revealing to us as cult favorites and credibility markers. And if you're gonna break the rule, for God sakes don't tell us.

"Track four was actually supposed to be an Unearth song, but I skipped it because it doesn't look so hot to have you own band on your list," Maggard told Noisecreep, effectively disqualifying himself from our cutthroat competition ... But wait. At the end of the day, given the circumstances that commenced, we have to say we can understand why the bassist fudged his list. "My band popped up again in the number 18 spot, so I let it slide since destiny had us in the cards," Maggard said.

Our next question after "Why didn't he just scrap the second listing as well?" was "How many damn Unearth songs does Maggard have on his iPod?" But in the final analysis, we decided Maggard had some pretty interesting -- some might consider downright embarrassing -- songs on his list, including 50 Cent's 'High All the Time' and Cat Stevens' 'Father and Son,' so we decided to let his indiscretion slide and publish his entire list, which is an exercise in eclecticism. In other words, if we found the dude's iPod lying on the floor in a subway, we just might not erase the machine (though we'd probably sterilize the headphones).

"Well, I gotta say, I have done this a few times when I'm completely bored and flying to Australia," explained Maggard of his contribution. "In the past, my iPod would produce a class 'F' shuffle list that would make me completely want to chuck the thing across the aisle and deck one of my bandmates in the head. This time around the outcome wasn't so bad. For the most part I actually do listen to these bands or have quite often at some point over the last 10 years."

Pantera -- 'By Demons Be Driven'

All That Remains -- 'This Darkened Heart'

Mötley Crüe -- 'She Goes Down'