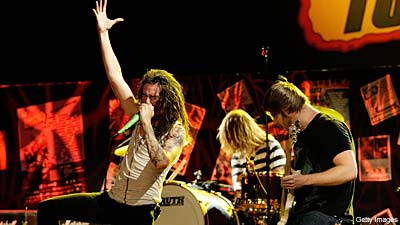 Christian metal band Underoath has played Warped Tour six years, but one of their biggest highlights is sharing a dressing room with Ice-T and Body Count during the Vans Warped Tour 15th Anniversary Celebration Event in Los Angeles on Sept. 6.

"It was awesome," keyboardist Chris Dudley told Noisecreep. "It was seriously, like, the coolest thing ever. He was a nice guy. He just kind of hung out and did the backstage thing. It was fun."

Underoath and Ice-T were among about 11 bands that took part in the festivities, which were captured for a one-night-only national theater event presented by NCM Fathom and 4Fini on Thursday, Sept. 17, at 8 p.m. ET and PT; 7 p.m. CT; and 6 p.m. MT. Also appearing are the Aggrolites, the All-American Rejects, Bad Religion, the Decaydance All Stars, Katy Perry, NOFX, Ozomatli, Pennywise and Rise Against.

The movie theater event, which will be featured in more than 460 separate venues, will encompass two hours of performances as well as behind-the-scenes footage. Tickets for the theater event are available at participating theater box offices and online from Fathom Events.

Warped Tour founder Kevin Lyman explained the show was four and a half years in the making. "I was trying to figure out what to do with the 15th anniversary," Lyman told Noisecreep. "At one point, I had this grandiose idea to do it with a big NASCAR race in Southern California and have cars painted and all this craziness that goes through my head sometimes. It was probably a little bit of an ambitious project in general. With these economic times, I think it was way over ambitious.

"Then I talked with MusiCares and the Grammy folks. I thought we could raise some money for MusiCares and do it as a one-off show. Then I thought, 'Wait, maybe we can do it with a theater [chain], so we can film it somewhere, but kids across the country can actually be a part of it.' Naturally it started progressing into this monstrous project. We're editing right now. Sunday night was the show, by 8 [AM], 9 [AM] you're starting to get edit notes. We have to work a little bit to make sure the movie stays PG. We're trying to figure out how to make Ice-T and Body Count work. It might be tough."

Besides being fun, Dudley said the atmosphere of the event was slightly weird. "It was at the Nokia Theatre, which is a basic theater-like set up," Dudley relayed. "But it has this rotating stage, so while one band was playing, another was setting up. It was this whole weird thing. They had us sharing a dressing room with Ice T, which was pretty awesome. That just ruled. That made the night pretty interesting. But it was weird. The crowd, I think, was kind of weird, just because each band plays four songs. It was such a diverse bill I don't think the kids really had time to get really stoked on any one artist. Somebody would come up, they'd be stoked and they'd be gone in 15 minutes. It was pretty funny. We had to follow Katy Perry, which was pretty hilarious. We don't really fit with her at all."

This year, Underoath played the Warped Tour after taking a year break from the festival to perform as part of the Rockstar Mayhem Fest, also founded by Lyman. Dudley has seen a drastic change in Warped Tour's lineup. "There wasn't really any heavy bands at all this year," Dudley said. "There was probably two or three heavy bands on the whole tour. It seems like they scaled back a lot this year. Previous years, there were heavy bands on the smaller stages, the main stages, etc., etc. It seems like they might have scaled it back a little bit.

"I guess dancey techno music with the autotune singing and the screaming -- that's really big now," Dudley added. "There was a whole lot of that. That might have been taking over. Different strokes I guess. It's not my thing. But that's what the kids like, not to sound like an old dude. But it's not going to affect what we do. We're going to keep writing the kind of music we want, if kids, or people in general listen to it, then that's cool. If they don't weird still having fun writing it."

However, rock and metal have played a key role in the Warped Tour's history. "It's interesting because we were known as a punk festival," said Lyman, who is currently booking the 2010 festival. "But metal kind of inspired me to start the Taste of Chaos tour that I started five years ago. When I saw that punk and metal were starting to mesh together, there was that line, with bands like the Used, Killswitch Engage, My Chemical Romance. It was punk, but there were metal influences. A lot of metal bands wanted to come on the Warped Tour: Every Time I Die, All That Remains. That kind of inspired me to start the Mayhem Festival.

"These bands need a home to develop. I started looking at the metal festivals, they weren't really set up to develop artists. The side stages were for whoever could pay the most money. I think we've done a great job with the second stages we put on that tour. Metal and rock, it started with Warped, but it spun into some of the other things we do. There's always going to be a place for rock.

"Ice-T and Body Count, that was really cool. Underoath started on Warped and has played Taste of Chaos and Mayhem for us. Underoath and Rise Against and Ice-T sharing a dressing room. When Body Count hit the stage [at the anniversary party], you saw everyone run over and peek through the curtain. People didn't want to miss that. It was cool to see everyone get excited."