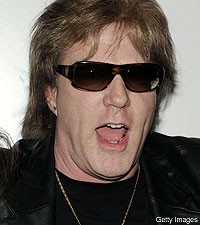 If you think you'll catch Twisted Sister live the next time they roll through your town, think again. So says guitarist Jay Jay French. "It will never ever happen. I would just assume things would maybe happen, but we will never tour [again]. I look at the mathematics of it every year, the mathematics makes no sense. None. Every year people ask me, every year I revisit the math. Every year it completely makes no sense to tour. It's just an incredibly money-losing proposition. I don't like losing money."

Twisted Sister has been around well over 30 years, and French is the one member that has seen it all: member changes, up and down chart positions, the crazy '80s and a breakup. The band formally reunited just a few years ago and plays only a handful of dates each year.

So while the demand for a full tour exists, French says it makes better business sense to not devalue the brand and madness that is Twisted Sister. In fact, the band tends to do just the opposite of their classic counterparts.

"I know what these [other legacy] bands make, I know their lifestyle, I know what they do," continues French. "I can't function that way. I don't believe it's viable for them. I believe they [tour] because they really have no other options on this planet. And by going out on the road constantly, they devalue themselves because they're out there all the time. We work in a completely separate business model. If I don't play, guess what? My value increases, doesn't it? So the less I play, the more valuable I become. So I work completely opposite. I'll bet you I make more money playing 12 shows than most [other] bands make playing 50 shows."

But not touring and not playing at all are two totally different things. In fact, in the past couple of years, Twisted has become a hot commodity on both the European and American festival circuit.

Explains French, "We average one show a month. So it's like 12 a year and we're going to be doing 15 this year. And most of them are in Europe and South America, because the offers are huge and the amounts of people are huge. And frankly, the festivals outside the U.S. tend to be better organized, and they've been going on for years and years and years. The American tours just haven't gotten quite the vibe and handle on it that they've got in Europe. They've been doing it in Europe for like 25 years, they have it down. You know, Bang Your Head, Wacken. And then the culture of the kids to travel and to camp right there is built into the nature of what they do. That's a relatively new thing here in America."

Right now, Twisted Sister has two American dates this summer, headlining both the Midwest Rockfest and Rock n' America. The band will also play festivals in Sweden, Mexico, Switzerland, Norway and many more.