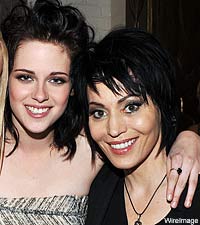 With all the news about 'Twilight' breaking box office records around the world, there's been surprisingly little news about Kristen Stewart's next role as Joan Jett in the biopic of '70s all-female group the Runaways.

With so many women in bands nowadays, it's hard for today's generation to realize what little power females had in the business back in the '70s. The Runaways were a twisted reincarnation of the '60s girl groups put together by Kim Fowley, a bizarre character who has been on the Hollywood scene forever; among his claims to fame are the Plastic Ono Band and the soundtrack to 'American Graffiti.' The Runaways weren't taken seriously in their time and were dismissed as a novelty. But today, they enjoy healthy respect from their female rocker brethren.

Most people best know the Runaways as the band that gave Joan Jett and Lita Ford their start, but the Hans Landa breakout role of the film may turn out to be Fowley, who will be played by Michael Shannon. In addition of Stewart playing Jett, lead singer Cherie Currie will be played by Dakota Fanning, who also stars in the 'Twilight' sequel 'New Moon' and Scout Taylor-Compton is playingLita Ford.

Written and directed by Floria Sigismondi, the acclaimed video director for Marilyn Manson and the White Stripes, 'The Runaways' has reportedly just been completed and is shopping for a distributor, but with the immense success of the 'Twilight' franchise, the film should be snapped up soon.