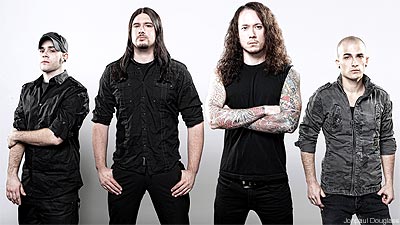 After all the rumors, after all the speculation -- even after all the comments from band members that scrambled away from any real answers on whether Trivium drummer Travis Smith was to return to the band after sitting out the most recent tour -- the band reveals their new drummer is Nick Augusto.

"We're really happy to have our good friend and fellow Floridian Nick Augusto join the Trivium family," Vocalist/guitarist Matt Heafy commented. "Nick's drumming is very technical and diverse, and he brings a real intense energy to the band and we can't wait for everyone to hear the new song, 'Shattering the Skies Above,' that we just recorded with Nick. I think it's the best Trivium recording we've ever done; it's raw, full of energy, and I think Nick's drumming really pushed us to a new level."

Many fans have already seen the former Maruta drummer in action with Trivium when he filled in for Smith on tour. For those that haven't, the band has released this video of Augusto recording 'Shattering the Skies Above.'

The aforementioned song is set to be a part of the digital-only 'God of War Blood & Metal' EP, along with a cover of the blistering Sepultura classic 'Slave New World.'

With this news fresh, the Trivium will embark on a tour hitting Asia, New Zealand, Australia and the U.K. for what will be their final run in support of 2008's 'Shogun' before going back to the studio to record the full-length follow-up.