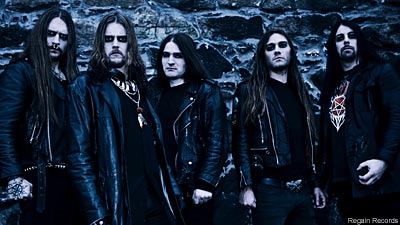 Trident bassist Alex Impaler is as big a metalhead as you or I, and not just because he plays in Swedish metal bands. In addition to practicing kickboxing when he's not playing music, he collects Iron Maiden memorabilia. "I have around 360 albums, 100 T-shirts and I don't know how many 'things': pins, posters, patches, Eddie figures," Impaler told Noisecreep. He doesn't merely acquire "stuff." He also sees the band as often as he can. "I also like to travel around Europe to see them. So far, it's 45 times," he admitted. Sounds like a guy after our own hearts.

Trident -- that's a three-pronged fork, not the chewing gum -- are an up and coming band in the metal underground, but if they have they're way, it won't be that way for long. "We play hard and raw blackened death metal, the kind of death metal that we love," Impaler said, in true metal warrior fashion. "We have the intention to conquer the world, and we will do everything we can to make it to the 'big scenes.' We will never rest until we reach our goal, and then we will play even more. We will tour as much as we possibly can to make Trident as large and powerful as possible! Nothing can stand in the way of the Trident."

The band has confirmed a smattering of Euro festival appearances, among them Festung Open Air, Dukkem Open Air, Eindhoven Metal Meeting. "We are working on some tours in the fall," he said. All dates will be posted at www.trident666.com.

While members of Trident play in other bands, that's not a stressful scenario for the individuals or the whole. "It's not that hard, but I have to separate things. As long as we don't double book, it's no problem at all," Impaler admitted. "Music-wise, it's very easy to separate because the bands are not similar at all and different approach on stage as well."

Alex doesn't think that the extreme Swedish metal scene in 2010 is an underground one. It's, in fact, rising to prominence. "We have a lot of great acts in Sweden," he said. "I really don't know what's going on in the rest of Sweden but in Stockholm, there is a lot going on. Just look at Nifelheim, Dismember, Watain, Necrophobic. For me, it's an honor to be a part of the Sweden metal scene, especially the Stockholm one. It's known throughout the world and I'm glad to be one of them making it with my contribution."

To book Trident for a hell of a show, send your request to: trident@live.se.