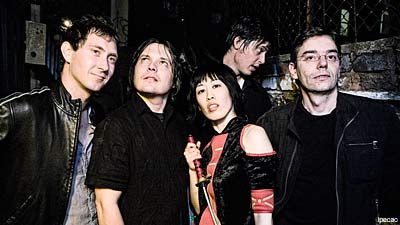 "A lot of the bands I've played in, like Mr. Bungle, were reactionary music. That band in particular was very much about not doing what we're supposed to do," said Trevor Dunn, the bassist extraordinaire -- with a résumé too big to list. It's safe to assume most other bands Dunn has played with, like Fantômas, have been some sort of rebellious statement. His new band, Madlove, is no exception, because no one would have expected him to make a pop rock album. But it was a personal quest of sorts, and that was the whole point.

"Over the past few years, I've been writing more accessible rock music, almost as a personal challenge in a way. I like a lot of pop music and rock music. I should be able to do this instead of always writing some weird avant-garde stuff," Dunn told Noisecreep. Madlove is not what most would have predicted to come from such a notorious jazz and metal bass player -- who also wonders himself, saying, "Maybe this is just me getting older." But Madlove is about a desire to try and play pop music, like Britney Spears. Yes. You read that right.

"I'm just going to come out and say it. I'm a huge Britney Spears fan," Dunn proclaimed. "I love pop music like that, and not just her, but other stuff in that vein." Dunn explained the root of his fascination -- the craft, "I'm fascinated about how, musically, it's achieved. I listen to that stuff and one of the first things that comes to mind is, 'How in the hell did they make that record?' It's really amazing how people make records like that."

Many have argued with Dunn, trying to sway him from the Spears adoration, citing that she doesn't really write her music, to which Dunn said, "That doesn't bother me at all." If anything, the detractors have only fueled his fire for the pop princess. "Certain friends of mine will e-mail me some ridiculous gossip story about Britney in hopes that I'll think she's lost it and I won't listen to her music anymore," Trevor pointed out. "This is the exact opposite of the effect it has. Bring it on. The weirder she is, the better. Shave your head, go for it. I was thinking when she shaved her head, she should have started a rock band, like a quartet, like a punk band. It would have been awesome. She really would have been my hero at that point."

For those who are weary that Madlove won't have the classic sounds and odd structures Dunn is known for -- fear not! It's there. "This is just my version of completely accessible," Dunn says.