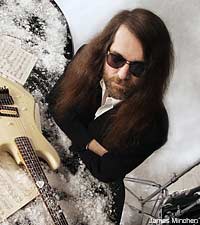 Trans-Siberian Orchestra founder Paul O'Neill subscribes to a simple, 'Field of Dreams'-like theory when deciding whether or not to bring his live show back to arenas. "As long as the people keep coming, we'll keep bringing it back," O'Neill told Noisecreep matter of factly.

This winter, Trans-Siberian Orchestra are touring in support of their latest album, 'Night Castle,' which hit stores Oct. 27. The massive trek -- which includes both matinees and evening performances in many markets -- begins Nov. 1 and rolls on through early January. "We're psyched because we're doing a lot of 'Night Castle' in the second half of the set," O'Neill said. "Probably sometime this spring, we'll start the world tour.

"But the first half will be 'Christmas Eve and Other Stories.' We still haven't broken out of that. The spring tour will be 'Beethoven's Last Night' in its entirety. The second half will be songs from the other albums. Again, pretty much following the Who. They would tour with 'Tommy' and the second half would be songs from other albums. Then they went back to just doing regular concerts. Then they did 'Quadrophenia' in its entirety. We have yet to do a regular rock concert tour because I like the whole rock opera, third-dimension thing."

Included in that "third dimension" is the occasional special guest who joins Trans-Siberian Orchestra on stage.
"Last year was great because we've always had special guests," O'Neill said. "But I was talking to my friend and he said, 'Paul, Greg Lake: Emerson Lake and Palmer, British. Paul Rodgers: Bad Company, Queen, Free, British. Ian Hunter: Mott the Hoople, British. Roger Daltrey: the Who, British. What do you have against Americans (as special guests)?'"

The friend was Steven Tyler of Aerosmith fame. "So he came out last year and did 'Sweet Emotion' and 'Dream On' for three shows, and just tore the building apart. It was really cool -- especially for the younger band members. Just to see a master craftsman at work was great. You've seen us live. It's Pink Floyd on steroids. When Steven Tyler was on the flight deck, it didn't matter what the special effects were. It was Steven's flight deck. He held that coliseum on the palm of his hand. When you squeezed it you could feel a pulse. He was such a gentleman, such a class act. Very kind, very humble, in the way he took time for everybody. It was like, 'See him? That's the way you act. He's the Fred Astaire of rock 'n' roll.'"

However, special guests aren't the only surprises. "Every year, we have to come up with something new so the 'shock and awe' factor doesn't die away," O'Neill said. "Last year was getting that whole trussing system to move during the show. I told my lighting company, 'Guys, the whole trussing system has to move during the show.' They said, 'Paul you can't do that. That's impossible.' The guys figured it out. It was expensive, but it looked really cool."

This year, O'Neill promises more toys and more pyrotechnics. "There's more band members, too," O'Neill said. "I hired a bunch more back-up singers -- even though some of the new kids that we're developing now were born in '92, '93. My God, makes you aware of just how fast time is going by."

Like last year's tour, O'Neill is keeping the ticket prices low, between $25 and $60, before fees, in all markets.

"No golden circle. None of these special packages," O'Neill said. "What's the point of putting on a huge show if only corporations can afford to buy tickets?"