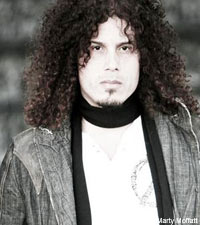 Trans-Siberian Orchestra are a holiday tradition for many, including the band members themselves. "It has come to that point where it is tradition in most people's lives that they have to come to these shows, and it's definitely very interesting group to be a part of," singer Jeff Scott Soto tells Noisecreep.

Soto wasn't initially sold on TSO, though. It took being a part of the pageantry to really sell the idea. "It's not normally my cup of tea, and whey they asked me to be a part of it, I thought, 'I don't know if I'm going to fit in,'" Soto admits. "I didn't know if it was going to be something that I was really into. After last year's tour, it's something I fell in love with and doing it this year, it seems like more of a natural thing for me than I ever thought it would be."

Jeff Scott Soto is involved in many projects outside TSO, including his new band W.E.T. In the past, Soto sang for Talisman, Yngwie Malmsteen and Journey, among others. No matter the project, Soto says the 'fit' has to be there to really engage his creativity.

"I've never really been into Broadway or show tunes or that type of thing," he said. "TSO kind of tapped into that whole side of music that never really appealed to me. It's the fact that it is more rock and gives me the chance to get a little more soulful here and there as well. That gives me more of a feeling that I can actually fit in."

Catch Trans-Siberian Orchestra on tour through Jan. 3. The band released 'Night Castle' with Soto on vocals earlier this year. 'Night Castle' does not feature a Christmas theme.