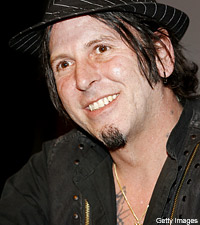 "L.A. Guns just keeps on rolling along," he says cheerily. But there's another project afoot that he's very excited about, too. "The big news in my life is that I have a signature guitar coming out this year. I'm trying to get the word out there for people to name the guitar."

But wait, good news comes in threes so they say, and there's more excitement in Guns' world: He's now the proud and doting father of a baby boy. "A new chapter of my life has begun, being 44 and having my first baby, it's a great time to do it," he enthuses. Unfortunately, there is a downside, though. "The joy of having him is awesome, but the pain of leaving him is pretty brutal," he says of the time he spends away touring. "But I've got to do what I've go to do. He needs food, and he can't have food if I don't go out and play."

Tour dates have yet to be set, though L.A. Guns -- the Tracii Guns-led version, that is, not the one fronted by Guns' former cohort Phil Lewis -- intends to tour the U.S. and Europe throughout 2010. "While I go out and promote the record for the rest of the year, it means I have to leave my child."

But not alone, we joked, right? "Yeah, yeah, right," Guns laughs at the dig at his parenting. "My one-year-old will be here by himself!"