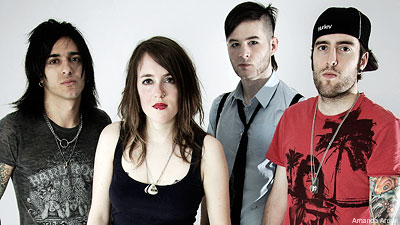 Toronto's Frankie Whyte used to dress up as Peter Criss for Halloween and copy Ace Frehley licks when she was a kid. Now, her band Frankie Whyte and the Dead Idols will be supporting Kiss for four shows - July 10 in Sarnia, Ontario's Rogers Bayfest; July 13 at Montreal's Bell Centre; July 15 at Cisco Ottawa Bluesfest, and July 18 at Halifax Rocks.

"I drove to Buffalo [NY] to Darien Lake to see them and Peter Criss was in the band at the time and it was totally amazing," recalls Whyte. "I'm a huge fan. We are all really excited."

The indie band, heavily influenced by '70s and '80s arena rock even though it's more Joan Jett than Bon Jovi, won't be adding pyro or confetti to aggrandize its regular stage show and appeal to all those KISS fans in the audience.

"We can't afford pyro and we can't afford the risers and stuff, but we like to do it the way KISS does it and all those old rock bands," she says. "There's only so much that they can allow on that kind of stage with that kind of space, so basically we have to count on ourselves to bring it really hard and we're pretty confident in that regard."

At the shows, Frankie Whyte and the Dead Idols will be selling a new EP, Hollywood Ending, produced by Our Lady Peace bassist Duncan Coutts. Whyte met Coutts through a family friend and the two have been writing together the past three years. Now, with the Dead Idols line-up solidified - Danny C on guitar, Zach O'Rourke on bass and Johnny Lightning on drums - they are writing as a band.

"I just like having a band scenario," says Whyte. "Being a one person deal is totally cool, but I definitely want just the whole vibe of being a band. It's cool. I can't work just by myself. I need the different perspective and the input of everyone else and the idea of a gang."