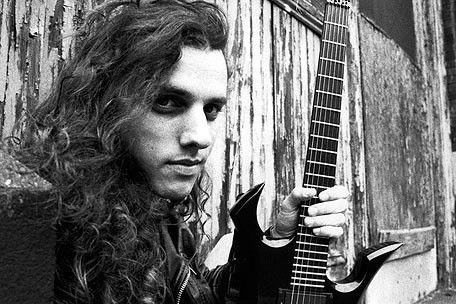 When Death mastermind Chuck Schuldiner passed away on Dec. 13, 2001, at the age of 34, the metal community lost one of its most important innovators. Throughout his 18-year recording career, the guitarist/vocalist continuously pushed the envelope. Never content with genre limitations, he would go on to introduce elements of jazz and other left-field musical styles into his provocative songwriting. The least Noisecreep could do was to compile a Top 10 list of Death songs to celebrate this maverick.

'Zombie Ritual'
From 'Scream Bloody Gore' (1987)
The second song from 'Scream Bloody Gore,' the album that arguably kicked off the death metal revolution, 'Zombie Ritual' typifies Schuldiner's early songwriting style. The song features sped-up rhythm charges and ghoulish vocal growls along with dashes of much more intricate Egyptian-sounding guitar melodies thrown in during its intro section. But it's in the mid-tempo chorus that 'Zombie Ritual' truly becomes a classic among Death songs.
Read 'Zombie Ritual' Lyrics
'Denial of Life'
From 'Scream Bloody Gore' (1987)
This track starts off like a cyclone of machete-sharp riffs, thrashy drums and Schuldiner's signature grunting. But around the 40 second mark, the band starts doing something strange with the tempo. First it seems like drummer Chris Reifert slows down his snare drum hits. Then a few seconds later, the rest of the band follows suit, until all of a sudden a half-time riff comes in -- blowing open a slower, crossover-influenced chorus. Godly.
Read 'Denial of Life' Lyrics
'Leprosy'
From 'Leprosy' (1988)
The dizzying musical intro for the title track of Death's 'Leprosy' album sets the stage for the carnage that awaits you. "Bodies deformed way beyond belief/Cast out from their concerned society," Schuldiner screams during the opening verse, and you could almost hear the bile coming up from his stomach wall. The song also has several time signature shifts that keep you on the edge of your seat in ways other Death songs might not.
Read 'Leprosy' Lyrics
'Pull the Plug'
From 'Leprosy' (1988)
'Pull the Plug' is the closest Schuldiner and company ever came to writing an anthem. A staple of their live show, the song contains perhaps Death's most recognizable guitar riff -- the fat power chords beneath the verse sections. Bill Andrews' backbeat during that riff is borderline funky, with his bass drum locking into the guitars with airtight precision.
Read 'Pull the Plug' Lyrics
'Living Monstrosity'
From 'Spiritual Healing' (1990)
'Living Monstrosity' takes you inside the anguish that crack cocaine had wreaked on American inner cities. Schuldiner goes for the jugular with the lines, "Born without eyes, hands, and half a brain/Being born addicted to cocaine." If there is a better anti-drug metal song, we can't think of one. 'Living Monstrosity' is such powerful moment in the catalog of Death songs that we'll even forgive the cheesy flange effect they use right before the guitar solo.
Read 'Living Monstrosity' Lyrics
'Flattening of Emotions'
From 'Human' (1991)
For the 'Human' album, Schuldiner welcomed Paul Masvidal (guitars) and Sean Reinert (drums) -- both from teenage technical death metallers Cynic -- and Sadus bassist Steve DiGiorgio into the band. 'Flattening of Emotions' is the first time you hear this new-and-improved version, and Schuldinger sounds invigorated by the change. By this point, his writing had become increasingly technical, but he always found interesting ways to sneak in memorable melodies and hooks into Death songs.
Read 'Flattening of Emotions' Lyrics
'Cosmic Sea'
From 'Human' (1991)
It's not often that you find an instrumental song on a death metal album, but Schuldiner never had much regard for convention when it came to Death songs. 'Cosmic Sea' serves as a showcase for the then-new lineup, in which each musician gets a chance to do a little showboating -- DiGiorgio's isolated run in the middle section recalls Weather Report's Jaco Pastorius' fretless bass guitar work. 'Cosmic Sea' closes with Masvidal and Schuldiner trading off on a series of guitar leads that begin morphing into each other just before the track fades away.
'The Philosopher'
From 'Individual Thought Patterns' (1993)
It's been said that the lyrics to 'The Philosopher,' the final song on 'Individual Thought Patterns,' were inspired by Masvidal -- who by then was out of the band. The most virulent line has to be "So you preach about how I'm supposed to be/Yet you don't know your own sexuality." Musically, 'The Philosopher' is a shredder that wouldn't have sounded out of place among early Death songs.
Read 'The Philosopher' Lyrics
'Crystal Mountain'
From 'Symbolic' (1995)
'Symbolic,' Death's sixth album, continued the progressive-minded direction they had followed since 'Human.' But outside of the usual tempo jaunts that Schuldiner favored, 'Crystal Mountain' has an arrangement that is kept lean and mean. Gene Hoglan's bass drum work alone is mind-boggling. If anyone is playing technical death metal this potent nowadays, we're not aware of it.
Read 'Crystal Mountain' Lyrics
'Flesh and the Power It Holds'
From 'The Sound of Perseverance' (1998)
We could pretty much have picked any cut from 'The Sound of Perseverance,' but we went with 'Flesh and the Power It Holds.' It has everything essential Death songs should have -- yet despite all the twists and turns, it never sounds overblown. Chuck Schuldiner might have passed away almost a decade ago, but here we are, still trying to decode his brilliance.
Read 'Flesh and the Power It Holds' Lyrics

Which Death songs are your favorite?

Filed Under: death
Categories: Lists
Comments
Leave A Comment
Back To Top