Open any hard rock publication these days and you'd be hard-pressed to not see some kind of coverage on a death metal band. The once vilified genre is everywhere these days. Not only are Job For A Cowboy t-shirts flying off the shelves at your local Hot Topic, a recent episode of Fox TV's 'Bones' based an entire storyline around a fictional Norwegian death metal band.

People who have been following the death metal scene since its early days know how hard the climb to the mainstream has been. In the late 80s and 90s most rock journalists dismissed the sound's gruff vocals and over-the-top lyrics but these days bands like Morbid Angel and Amon Amarth get showered with praise around every corner. However you feel about death metal, it's clearly here to stay.

Here is Noisecreep's list of top 10 death metal debut albums of all time. (Before you send us hate mail, the list is not in any particular order!) 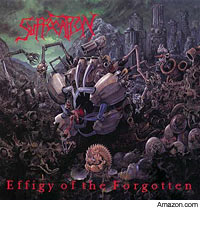 Suffocation – 'Effigy of the Forgotten' (1991)
From the very first cymbal chokes to the ferocious guitar leads that close the album, 'Effigy of the Forgotten' is one of the most breathlessly relentless metal albums you'll hear anywhere. Suffocation already had a respectable following in the tape trading community but no one was prepared for the Long Island, NY outfit to deliver a debut this utterly punishing. Every facet of the band's approach worked and the players all stepped up to the plate with career making performances. Frank Mullen's vocals are gruff and always demoniacal while Mike Smith's snare drum and double bass work on the record has gone on to influence legions of trap kit abusers. On songs like "Liege of Inveracity" and "Seeds of the Suffering," guitarists Terrance Hobbs and Doug Cerrito drop one mind-twisting riff after the other combining the technicality of European thrash with the speed of death metal. You'd be hard-pressed to find a debut album more essential than 'Effigy of the Forgotten.' 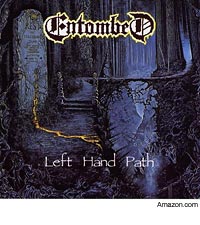 Entombed – 'Left Hand Path' (1990)
These days, you can't walk into a metal show and not hear the influence Swedish death metal has had in the last 20 years. But in 1990, a teenaged gang of misfits from Stockholm, calling themselves Entombed, came out with an album that would stun the underground community and change everything forever. For the time of its release, 'Left Hand Path' was radical and stubbornly abrasive in its aural presentation. The raw energy of crusty punk bands like Amebix and Discharge coursed through their material and where most of their peers aimed for airtight precision, Entombed went for feel. Uffe Cederlund and Alex Hellid's twin guitar attack has often been described as the "buzz-saw sound" and with good reason. Check out the way the opening riff on the title track cuts through Nicke Andersson's drums like a....well, you get the picture. L.G. Petrov's driving, sandpaper kissed vocals on tracks like "Revel in Flesh" and "The Truth Beyond" carries enough clarity in them to make out a sentence or two but for the most part, they push and pull just as hard as the drums do. Though the band would go on to make several great albums in their career, none have equaled the savage brilliance that is 'Left Hand Path.' 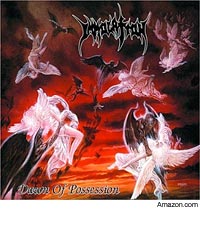 Immolation – 'Dawn of Possession' (1991)
Have you ever been to Yonkers, NY? It's just like any other town hugging the northeastern coast but their pizza is out of the world great! Immolation is the last thing you would expect to come out of this Bronx suburb. Their arcane and dissonant take on death metal has always had a European bent to it. On 'Dawn of Possession' the quartet proved they had the musical chops to not only pull of their endless array of complex arrangements but also, and more importantly, weave together one of the most intriguing set of songs the genre has ever produced. The tracks on this debut all brim with intense fury but there's a haunting eeriness in the atmospherics Immolation created. This is where they stood out from the pack. Listening to a song like "After My Prayers" all these years later still evokes a very specific and uneasy feeling. When my fellow journalists have written the history of death metal, not enough credit has been given to the band and specifically, original guitarists Bob Vigna and Thomas Wilkinson. Their odd counter melodies and unorthodox soloing on 'Dawn of Possession' was so ahead of its time that we're all still playing catch up. 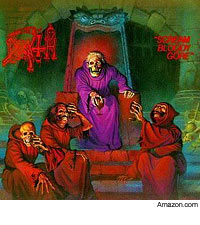 If there was ever a voice perfectly suited for this kind of stuff, Chuck Schuldiner had it. The brainchild behind the fittingly named Death, the guitarist/vocalist/songwriter's performances on albums like 'Leprosy' and 'Human' helped shape the vocal approach most of the bands in death metal would go on to use in the last 2 decades. But it was on 'Scream Bloody Gore' where most underground metal addicts first heard Schuldiner's anguished howls. His singing was downright horrific in tone and design but the 10 songs he wrote for the bench mark recording are no less ghastly. "Zombie Ritual," "Mutilation," and "Sacrificial" are the sound of a musician trying his hardest to take speed and thrash metal's sonic boundaries and demolish them for good. Schuldiner would take Death into far more progressive areas (musically and lyrically) in the later part of their career but 'Scream Bloody Gore' easily deserves a spot on this list. 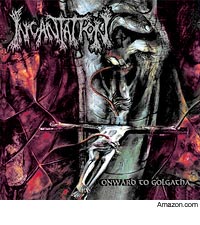 During death metal's first gold rush in the early 1990s, many of the bands getting record deals probably didn't deserve them. In retrospect, a lot of the albums that came out during that spell aren't even worth reinvestigating. Yet some of the groups whose music did warrant the public's attention never got their day in court. Incantation's labyrinthine arrangements, left-of-center guitar parts, and tormented vocals should have elevated them to the top tier of the death metal elite but they remain as underground as they were when they first appeared on tape trading lists almost 20 years ago. The down-tuned guitars on 'Onward to Golgotha' channeled the icy spirit of Celtic Frost and married it with the unbridled speed and might of modern (for the time) death metal. 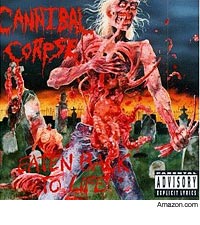 'Eaten Back to Life' was probably the first album that introduced death metal to many of the people reading this right now. It was the perfect record to turn thrash metal devotees onto death metal's harsher vocals and faster tempos. One of the album's most special gifts is how wildly catchy it is. The guys in Cannibal Corpse came of age during the time bands like Judas Priest, Iron Maiden, and Mercyful Fate were on every metalhead's playlist and the fully realized songwriting on 'Eaten Back to Life' shows that. Songs like "Mangled" and "A Skull Full of Maggots" might have titles that could have been lifted from an old issue of Fangoria, but that doesn't mean they don't have huge hooks and infectious choruses. Chris Barnes barks his way through the album so rabidly; you can almost picture the foam coming out of his mouth. Let's not forget the never-ending cavalcade of monster riffs found within the 11 songs. SOD's seminal 'Speak English Or Die' is still pound for pound the best guitar riff record anywhere but 'Eaten Back to Life' sure gives it a run for its money. Cannibal Corpse might have gotten more technical in the following years but this remains their most memorable moment. 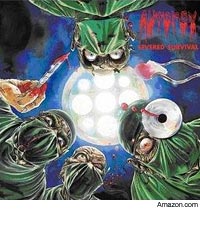 There was something absolutely funereal about Danny Coralles and Eric Cutler's guitars on 'Severed Survival.' Autopsy's introduction to most of the metal scene, the album would go on to become the "band's band" for acts as varied as Entombed and Crowbar. Danny Coralles and Eric Cutler's guitars and Chris Reifert's vocals sound like they were recorded in a garage on a 4 track but instead of crippling the project; it becomes another strongpoint coating the songs in a murky gloom. We're not sure the primitive recording sound is an outcome of a limited budget or former Metal Church guitarist James Marshall's production skills but we wouldn't want it any other way. 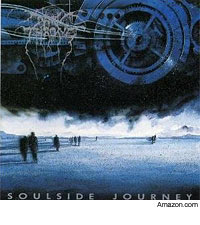 Albums like 'Transylvanian Hunger' and 'A Blaze in the Northern Sky' were catalysts for the black metal boom of the 1990s but their early work is quintessential European death metal. 'Soulside Journey' is a complex clash of adventurous arrangements, ghoulish vocals, and some of the most ornate and breathtaking guitar parts ever recorded in the genre. The band's influences are felt all over the album. Hints of Possessed, Death, and even Voivod, are woven into songs like "Cromlech" and "Neptune Towers" but Darkthrone are alchemists, coming out with something enigmatic and original. Though their black metal years have yielded classic results, with 'Soulside Journey' Darkthrone proved that they could have had an illustrious career in death metal. 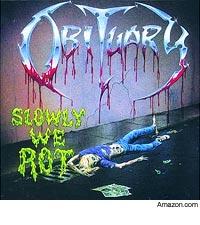 The vocals on 'Slowly We Rot,' Obituary's debut album, are so extreme that they don't even utilize actual lyrics; John Tardy's fevered delivery had no need or room for them. Critics have always dismissed death metal because of the incomprehensible singing and the Florida band responded with one big collective middle finger. Tardy gives one of metal's most spine crushing performances with every grunt, snarl, and screech pushing forward with reckless abandon. Trevor Peres's putrid guitar tone and Donald Tardy's Reed St. Mark (ex-Celtic Frost) inspired drums provide the ideal backdrop for the primal vocals. Their next album, 'Cause of Death,' was even stronger but in terms of debut albums, 'Slowly We Rot' deserves to be in this company. 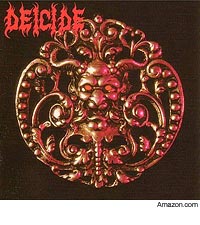 Even though they were born out of the fertile Tampa, FL scene, Deicide have never really aligned themselves with any other bands. Lead by bassist/vocalist/instigator Glen Benton, the quartet have always had a rebel aura around them. Even in the admittedly loutish world of death metal, Deicide stand out for their unwillingness to fit in. 1990's 'Deicide' put the band on the lips of every underground metal fan from Sacramento to Seoul. Right off the bat, "Lunatic of God's Creation" gets the album started with a tornado of barb wired guitars wailing at breakneck speed and from that point on, never rests. Benton uses a few different vocal approaches and styles throughout the album and often in the span of the same song. Steve Asheim never gets the credit his world-class drumming deserves and his playing on songs like "Dead by Dawn" and "Blaspherion" prove that. His blast beats are right up there with guys like Pete Sandoval (Morbid Angel) and Dave Witte (Discordance Axis, Municipal Waste) and his creative fills bob and weave around Benton's choppy vocal cadences. 'Deicide' was so unflinchingly heavy we're still playing catch up to it all these years later.