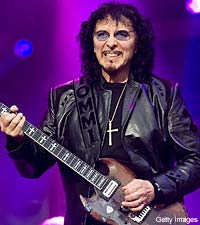 It's been a few months since Heaven & Hell's 'Devil You Know' was released, but few have forgotten about it. Comprised of the Dio-era Black Sabbath crew, Heaven & Hell came together naturally after reuniting for three new songs on a compilation recording in 2006.

While Sabbath is instantly tied to the name Ozzy Osbourne, the band has undergone an impressive amount of member changes over the course of its 40-year existence. The release of 'Devil You Know' was what guitarist Tony Iommi described to Brave Words & Bare Knuckles as jumping into the deep end, and finding that their chemistry was still potent.

Heaven & Hell is also made up of drummer Vinny Appice, bassist Geezer Butler and legendary vocalist Ronnie James Dio -- who was also the frontman for Elf, Rainbow and Dio. During the time of Heaven & Hell's album release, Brave Words spoke to Tony Iommi about the creative process of 'Devil You Know,' and the time spent between Ronnie's house in Los Angeles followed by Rockfield studios in Wales.

As a follow up, Brave Words just released an extension to the feature, publishing a large amount of the interview from April. Much like their process of working together, Iommi shed light on Ronnie's lyric writing, saying to BW that "it was a real band effort ... He shared what he was going to do with everybody." He described Dio as constantly jotting down notes, piecing together the words by running off or burning the midnight oil only to come back the next day with something more complete to bring to the table.