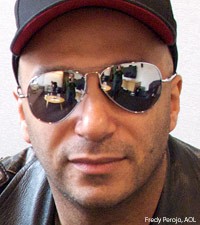 Tom Morello's latest project, Street Sweeper Social Club, has been doing very well since their opening dates for Nine Inch Nails, but Morello's reputation alone has been a considerable draw. He was as magnetizing to the media as Zack de la Rocha in Rage Against the Machine, and stood alongside Chris Cornell in the now-defunct supergroup Audioslave, so it comes as an entertaining surprise to learn that he was a male stripper during his early days of rock 'n' roll.

Morello recently told NME that, after his Harvard graduation and move to Hollywood, he was unable to find a job and, going hungry, worked as an exotic dancer. "'Brick House' was my jam!," he said, adding, "All I can say is thank god it was in the time before YouTube!" He says he did bachelorette parties, but will only admit to stripping down to his boxers.

Known for his political involvement and utilizing his large fan bases to spread the good word, Morello feels that Street Sweeper has been the ultimate example in his band/fan engagement attempts. "Merely rocking to our jams is a ticket for admittance," he also told NME. "Throughout my work, I've tried to engender the idea of 'We're in this together' and these albums or concerts are not some kind of tutorial on globalization."