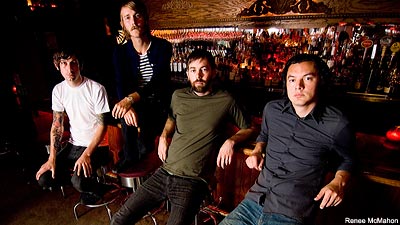 Not all touring packages are a good fit, especially when religion is thrown into the mix. In a recent video interview with Dirty laundry These Arms Are Snakes dished on they're touring with a "Christian screamo-band" years back. "We were trying to make it big," confesses vocalist Steve Snere on why the tour even happened. "And we failed miserably, and I hated every minute of it." As the band laughs, Snere blurts, "That was five years ago. Cut me some slack."

The band in question, though never directly named by These Arms Are Snakes, is most likely Christian outfit Underoath who TAAS toured with back in 2005. Underoath has a track record of conflict with bands over their religious stances and conducting prayer circles and Bible studies backstage. In 2006, Underoath and Fat Mike of punk mainstays NOFX squabbled and argued about the band's beliefs against gay marriage.

Admitting a confusing paradox he sees with the Christian bands he's shared bills with, bassist Brian Cook describes having These Arms Are Snakes personal beliefs and lifestyles looked down upon, but counters, "We don't approve of the way they talk" citing uses of racial and sexual derogatory words in "innocuous and offhand" remarks from unnamed Christian bands.

After the heavy talk of religion, the interview moves to the steamy topic of sex in the van and host Malia James accuses Snere of hitting on her, to which he laughs, "Don't be full of yourself."