Therion mastermind Christofer Johnsson has been dreaming up Les Fleurs du Mal for years now, but it took his band's 25th anniversary for him to bring the project to life. The new album features a song cycle inspired by the work of legendary French author and poet Charles Baudelaire. The Swedish-born Johnsson recorded Les Fleurs du Mal at Adulruna studio, located in a separate building next to his decadent "Villa Adulruna" where the band lived together while recording.

A sprawling effort, Les Fleurs du Mal is another stunning album from the always daring Therion canon. Noisecreep got its hands on "Polichinelle," a track from the forthcoming album. We also spoke with Johnsson about Therion's ever-evolving musical style and whether or not it's caused problems for him with record labels.

Congrats on the 25th anniversary of the band! If someone would have played you Les Fleurs du Mal back when you were recording the Of Darkness... album, what do you think you would have said?

Difficult to say. On one hand I really identified myself had with the death metal movement, but on the other hand I listened to a lot of different types of music and was very open-minded. If I would have seen the entire development, album to album, I think I may have seen the logic in it, just like today.

Besides Ulver, I can't think of another band in the heavy metal realm that has redefined its sound as frequently as Therion has. You must have faced a lot of resistance from record labels and management throughout the band's history?

Not really, surprisingly. I had full support until we did Theli (1996), then Nuclear Blast was very puzzled and sceptic, but they never argued or made anything difficult for me. For the following studio album, Vovin (1998), there were some question marks if it was the right thing to change sound again, but no big deal. Then we just did whatever we wanted until now with Les Fleurs Du Mal. The big problem now is that they are covers, the sound itself is not the biggest issue, even though they were not in love with the sound either.

Management always gave advice, but they knew I do what I want anyway.

The new album was partly inspired by French author Charles Baudelaire. Tell us about the career parallels you feel you share with him. I know he dealt with a lot of controversy during his time?

I'm not sure I see any career parallels. My inspiration in relation to the album was mainly by the reactions from the society of his poems that were forbidden.

The material on the new album must be a huge undertaking to perform live. What can fans expect when they come see Therion on tour? How big is the band this time out?

We perform three of the songs on this tour and besides two of the singers having to sing in a language they don't speak, they are not more difficult or easy than any other Therion songs.

We are eight people on stage like the last couple of tours, but with three singers, instead of four, and a keyboard player.

Can you see yourself ever going back and writing a straight-up, metal Therion record again?

Depends of what you mean with "straight up". We will definitely make a "regular" Therion album again, as of the definition of how the band's sound have been the last 15 years, but of course not sounding like any particular album. 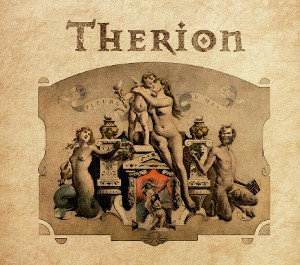 Les Fleurs du Mal will hit stores on Nov. 27 and can be pre-ordered at this link now!