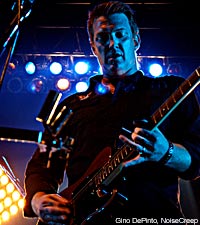 According to reports, the self-titled debut from Them Crooked Vultures, the heavily-buzzed-about rock and roll supergroup featuring Queens of the Stone Age's Josh Homme, Foo Fighters frontman Dave Grohl, and Led Zeppelin bassist John Paul Jones, will land in stores on Nov. 17.

While this release date has yet to be officially confirmed by the band or its label, Interscope Records, Them Crooked Vultures have been saying for months that fans could expect an album would be in stores before December.

On Monday, the band's first single, 'New Fang,' will arrive at the nation's rock radio stations. Video is available of the band performing the track live at New York's Roseland Ballroom on Oct. 15.

Them Crooked Vultures recently wrapped their Deserve the Future Tour in Manhattan. It was the band's first North American tour. According to Foo Fighters drummer Taylor Hawkins, who claims to have heard the Them Crooked Vultures LP, "It's really great. I'm really proud of Dave, and I think he's having a real blast not having to shake his booty at the front of the stage for a while, you know?"

Them Crooked Vultures was first hatched back in 2005, but the band didn't start recording until this summer. Noisecreep has a full review of the band's New York City gig, during which Homme apologized repeatedly for unloading so much new music on the audience.