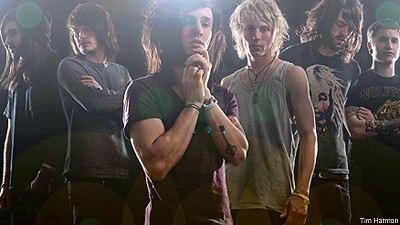 Metal-hardcore act the Word Alive have finally unveiled the video for 'The Only Rule Is That There Are No Rules.' "We couldn't be happier," vocalist Tyler 'Telle' Smith told Noisecreep on the finished look of the band's first video. For the heavy driven track from the sextet's 'Empire' EP, the obvious choice was to bring eyes and ears to their live show -- which has been getting the band quick success for only being a little over a year old.

"Our live performance has become a staple of that growth," commented Smith. Rather than having the song play over a performance at the Glasshouse in Pomona, Calif., a full effect approach was taken. "Our director had the idea of filming the set and intertwining live audio to spice up the clip."


The band is slated to have a proper debut full length out in August, produced by Andrew Wade (A Day to Remember). The Word Alive will be playing the Bamboozle Festival before hitting the road with Stray From the Path.