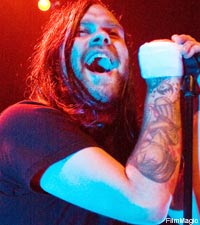 With 'Artwork,' the Used have created their rawest, loudest and most raging record since the band's self-titled debut began smashing faces in 2002. Live, however, the Used go the opposite direction -- they seem a bit tired.

During the band's hour-plus set in Atlanta, Used frontman Bert McCracken performed with bouts of infectious energy that were overshadowed by his too-frequent letting the audience take over vocal duties. Sure, holding the mic over the crowd can get a crowd screaming along louder, but I could get some friends together and blast 'A Box of Sharp Objects' to the same effect.

But with a bag of thunderous songs now four albums deep, The Used still kicked a hole in the crowd's head during jams like 'Pretty Handsome Awkward,' 'Take It Away' and latest single/concert opener "Blood on My Hands." This is fist-pumping stuff, and the Used know it -- Bert led the sea of waving arms, 'Hey! Hey!' chants and devil horns like a seasoned maestro.

The band played a good mix of old and new, knowing that with 'Artwork' only out a month, oldies would get the audience jumping the highest. Luckily, Bert had a plan to fix that. "If you don't have 'Artwork,' go to a Walmart and steal it from them," he said. "Don't be a p---- and steal it online."

With the band's repertoire of painfully serious music, it's always interesting to see Bert's goofy-kid stage banter lead right into a drug addiction dirge like 'A Taste of Ink.'

"Looks like it's gonna be a rowdy f---ing evening," he said after bashing through 'Listening.' "And what I want to see is private parts."

His wish was the crowd's command: seconds later a deluge of shirts, hats and, yes, bras came flying onstage, the last of which Bert smelled, shook his head and said, "Stinky tits. But I could possibly be the smelliest mother f---er in here. I'm like an oyster omelet p---- onion."

The polarity of the between-song Bert and the during-song Bert was larger in years -- or at least shows -- past, when he would launch a vocal assault during each three-minute blast between jokey interludes. Now, though, his slinky demeanor seeped into his performance, meaning we heard a band as rough and ragged as ever led by a dude who paused in the middle of the ballad 'On My Own' to lead the crowd in "Loud! Now soft!" cheering.

A waste of a night? Not nearly, and on the strength of the heartfelt 'Blue and Yellow' alone.

When Bert separated the crowd in two ready-to-charge halves during the encore and said, "We want this song to be safe, so if anyone falls down, pick them up. Then kick the shit out of them," it felt like the combative, angry and damaged live show of the Used was back, if only for a second.