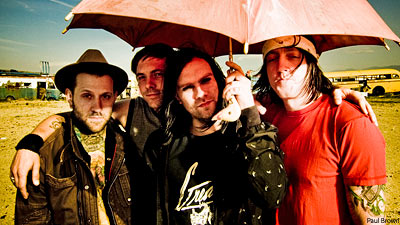 For 'Artwork,' the Used started from scratch.

"Everything is new," singer Bert McCracken told Noisecreep. "Dan Whitesides has been the drummer for more than two years, but having the opportunity to write a record with him was the glue that makes us be in love with each other and be best friends. It makes it fun to play music together. We're sick and tired of being associated with a genre with music we don't appreciate or give a s--- about. Screamo sucks. It's lame, like breakfast hash at your local diner. There is nothing good about it. So we set out to destroy a genre and create new one."

And that new genre has been christened "gross pop" by McCracken. "We're a rock band writing pop music," he said. "It's gross, dirty and disgusting, and the mistakes are there but we let everything shine through, and it makes you feel good. All my favorite bands follow this formula. Weezer's 'Pinkerton' just stuck in your head. 'In Utero' is the best example. That is the grossest, dirtiest record and you can't forget whatever-his-name-is that sang it." Of course McCracken means Kurt Cobain and was being sarcastic, for those who can't read between the singer's lines.

'Artwork' is the first record the band recorded without Goldfinger's John Feldman at the helm, and it was an amicable decision to try something new. "We pretend we burn every bridge that we come across, but we're still good friends and will work with him again," McCracken said. "But we had to do things our way this time. Matt Squire was the facilitator. We explained what we wanted to do, and he has the same background, since he is hardcore kid from the East Coast. It was easy. He let us go in there and didn't f--- around, telling me that my lyrics don't make sense. Neither did John, but I am just saying."

Even with the changes of management and producer, 'Artwork' is still the very best of the Used: intense and from an honest place.

The Used Tour Dates
on TourTracker.com