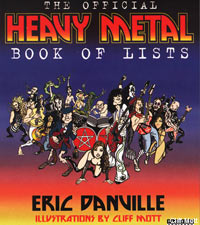 "I came up with most of the lists in bars, to tell you the truth," Eric Danville, author of 'The Official Heavy Metal Book of Lists: The Heaviest Book of All Time' told Noisecreep about his aforementioned book, which includes lists like '108 Sub-Genres' or 'Bands With the Words Dead/Dying' in their names!

"Seriously, when I was asked to do the book, the first thing I thought of was the Parents' Music Resource Center hearings in the '80s, when Tipper Gore and Susan Baker got their Senator husbands to propose a ratings system for offensive albums and presented it as a consumer rights issue," Danville said. While Gore and Baker were trying to dissuade people from certain bands, music and songs, it was people like Danville who were influenced to go out defiantly purchase what the ladies were warning against!

"They actually came up with a list of 15 songs, the 'Filthy Fifteen,' to prove their point. Half the songs were metal. Venom, Mercyful Fate, Black Sabbath, Twisted Sister. I hated what the PMRC were about, but loved the list of exactly what I should run out and buy!"

This year marks the 25th anniversary of the PMRC's beginning. So in honor of the occasion, Danville scribed the first four chapters based on their ratings system and as his rebellious reaction to such a classification of music. He said, "It's 'D/A' for drug and alcohol; 'O' for occult; 'V' for violence; and 'X' for sex. It's my own personal 'f--- you' to the idea of the government sticking their noses into America's creative community, which they don't respect or understand."

There's a whole bunch o' lists in the book, and Danville admitted to having a fave. "Of the ones I wrote, '12 People Who Found Themselves on the Business End of Sharon Osbourne!'I love Sharon Osbourne! Everyone thinks she's a real b----, and well, she probably is. But she knows what she wants, she gets it and she gets it on her terms. She takes no s--- but, uh, knows how to dole it out, literally. She's very metal. No wonder Ozzy loves her!"

Pertaining to the celebrity lists, Danville digs Lita Ford's and Jim Gillette's '12 Ways to Make a Metal Marriage Last.' "They recommend everything from saying 'I love you' a hundred times a day to using nipple clamps and bondage clothes and spanking. They're perfect proof that the family that plays together stays together," he admitted.

As for a 'sequel' list book, Danville says the outlook is doubtful, but "if Led Zep can get back together, anything can happen."

'The Official Heavy Metal Book of Lists' is out via Backbeat Books.