The Misfits are making record stores a little creepier today with the release of DEA.D.ALIVE, their first live record since the 1980s. The album focuses on the punk legends' more recent material from the band from which Glenn Danzig got liftoff.

DEA.D.ALIVE was recorded at the band's New York City gig last Halloween, as well as during their hometown New Jersey show on that same tour. Noisecreep spoke to longtime Misfit Jerry Only about his favorite live experiences; how knowing he was being recorded for a live album affected his real-time performance; the jet stream; and much, much more.

Since you are releasing a live album, people probably keep asking about your favorite live Misfits memories. But we want to know -- what's your best non-Misfits show memory?

First live show: Edgar Winter, Roosevelt Stadium in Jersey City. I saw the 'Toys in the Attic' tour for Aersosmith at the Garden; Then I saw KISS on 'Hotter Than Hell.' We would win records at the boardwalk in Seaside Heights and then go see the bands. KISS made me want to do live albums myself. They were the epitome of big shows and theatrical things. I saw Queen at the Beacon Theater, which is where I also saw KISS. That was a prestigious place. Back then, you had seats. Now, you see seats, you are like, 'Where are you going with this?' That aspect has changed about delivering a live performance.

It's like going from New York to L.A. It takes forever. But when going from L.A. to NYC, you skim an hour off, because of the jet stream and the flow. It's faster. Playing live is like that, flying back from L.A.; it becomes faster and more aggressive.

Give us the gist of the new live album and why you specifically chose to do a live record now.

This is a live album for the 'Devil's Reign' tour. When [guitarist] Dez [Cadena] listened to the live tapes, I didn't tell him what it was. He was like, 'Is that the album?' I was like, 'That's the nice to say, it's twice the speed.' We were able to transmit that with this live record. We can show you what that jet stream is like with the live record. It's not always pretty. It's bumpy. Flying is not always sun in the sky, either. 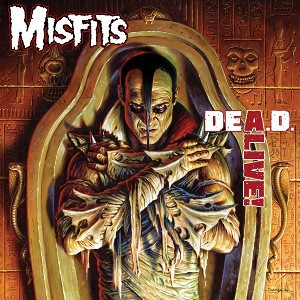 Live albums and the "jet stream" can be hard to pull off. Why were you able to pull it off?

We were peaking at the right time. We're like the [2013 Super Bowl champions] Baltimore Ravens right now. It's falling in place. You have to step over this stuff. It is a transitional period for us and we tagged it, and hit it right in the middle of the nose. People who like the band will get it; that's the beauty of being different.

Do you record all Misfits shows for posterity?

My son works our sound system and has for a while. On the last tour, we had two brand new digital boards that were capable of grabbing the front of house sound people hear and what's in the monitor. It's more think about.

The greatest sound I ever heard at a live show was Dio in Heaven & Hell. My friend had a mobile recording device, and it was something I had never heard before. There is technology that is big and fast and accurate, but what shoe fits you is where we are at. This was recorded professionally.We said, 'We'll record Halloween this year.' We didn't know why. Then we listened to it, and it made sense.

Did knowing you would be recording cause you to approach playing the show differently? Since recording equipment was capturing everything... did you do anything differently?

It makes you want to be...it takes away from you 'attacking' people live and performing to an audio system, technically speaking. You usually want someone's face grinding on your strings while you lean into the crowd while playing. So you avoid that type of stuff when you know it's being recorded.

But it's a live show. It's Halloween. Sometimes you have to throw the perspective of having something preserved for a million years to the side for a moment. Anything we lost visually to get the tape to sound how it did is a fair trade. At least today it is. But that night, I was like, 'I shoulda grabbed that guy who got in my face.'

Listen to 'Twilight of the Dead' from DEA.D.ALIVE

DEA.D.ALIVE is available now on iTunes and Amazon.