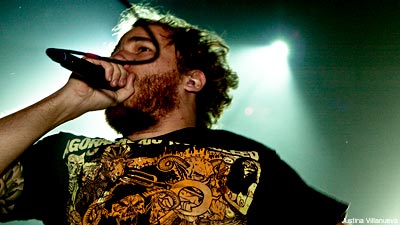 When I saw the Faceless open for Atheist back in July, I thought, "Wow, this band should really be headlining their own tour." On a recent Saturday afternoon, however, I found myself thinking, "How could Dying Fetus open for the Faceless?!" I thought about it so much I almost didn't want to see the band. But as soon as the Faceless' guitarists Michael Keene and Steve Jones started making spastic, jazzy riffs come out of their amps, I was put in place.

"We are the Faceless, and we are playing 'Planetary Duality,'" frontman Derek Rydquist said in between an atmospheric intro jam and the first track, 'Prison Born,' on their latest album 'Planet Duality.'

It wasn't long before I saw a kid sweating from air guitaring so hard. Even though the band played an album -- one filled with ultra-technical riffs layered in between what could be horror movie score music -- that was released an entire year ago in full, there was an overwhelming amount of super stoked personalities surrounding the event.

And lucky for everyone else living in the U.S., that event will take place every night in cities near you until Dec. 15, when the Planetary Duality Tour wraps up in Los Angeles. Right after two dates in Russia, the Faceless are off to Europe for most of January to tour with the Black Dahlia Murder, 3 Inches of Blood, Necrophobic and more on the Bonecrusher Fest tour.