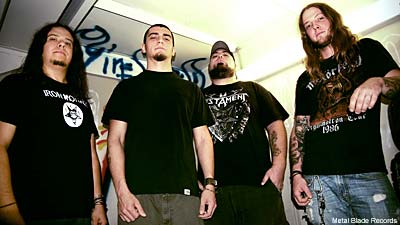 After listening to the Destro's forthcoming album, 'Harmony of Dischord,' which lands in stores October 13, it becomes almost immediately clear that they're not the type of band that should be touring with Arsonists Get All the Girls. The record is a tight-as-a-nun, face-melting melding of old school thrash and sludge. And it launches an unrelenting aural assault that lasts just under half-an-hour. In fact, it would almost remind you of Messhugah, a band guitarist Nick Emde says he grew up listening to.

"Our music is straight, heavy and what we're into ... it pounds you in the face, and doesn't let up, for the most part," Emde tells Noisecreep. "We're not a dance band, and we're not a breakdown band."

However, what the band happens to be is something that doesn't come up in the conversation, really. They seem to define themselves more by what they're not.

"We're definitely not a thrash band," Emde says. "We go to that more classic thrash sound, but if anything, we're thrashy sludge. We've had all of the odds up against us, and we've played certain crowds, and, this tour ... we're just not used to it. If it's a scene-y crowd and not a metal crowd ... younger kids, they all just wait for the breakdowns but that isn't happening here.

"Go somewhere else. If they're looking for that, they can f---ing go somewhere else, because we're not playing that s---. We're not gonna wear tight f---ing clothes or f---ing sing in our songs, or f---ing do any of that gay s---."

After this current tour, the Destro aren't sure what they're doing. There's seemingly a lot of stuff in the works, but nothing's been solidly confirmed yet. Emde calls this new record a "more exaggerated version" of the band's previous work, and adds that a lot of songs were ultimately cut from the final product, to make the record "as beefy and straight-to-the-point as possible.

"Hopefully," Emde continues, "this album will pick up and people will catch on to it. We want a better audience ... we're fighting for it. There are some people who are in tune with things and others that don't have a clue. Metal is so popular right now ... it's a hit or miss sometimes. You'll show up and they're just into the Born of Osirises and others are just down with the Suicide Silences ... it just depends."