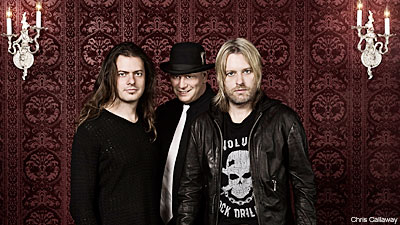 Chris Wyse has been a journeyman for much of his impressive career, playing bass for the Cult and having worked with Jerry Cantrell and Ozzy Osbourne over the years. Associating with heavyweights can overshadow a musician; perhaps that's why Wyse, who claims Iron Maiden's Steve Harris as one of his initial inspirations, is stepping out with Owl, the bluesy, hard-rock project he wrote and produced with drummer and longtime friend Dan Dinsmore, who is releasing the album on his Overit label.

"The folks I work with give me liberties, but this music is the most out there I can be," Wyse told Noisecreep. "Matt Sorum encouraged me to do my stuff." What could be better than support from a former member of Guns N' Roses and The Cult? "The biggest thing about it is the vocal weight. I am taking on the frontman role. I like having lead singers and being second vocalist, since I've played with the best of them," Wyse continued. "So this is new for me. Dan is one of the best drummers in the world. We've known each other since high school and he is part of my musical roots!"

Owl's self-titled debut will resonate with hard rock fans, as Wyse is creating some theater of the mind with the trippy yet charged music. He plays upright bass "50% of the time" and cops to his music having a "Zeppelin'y, Hendrix'y fantasy element." Wyse said, "I'm really singer-songwriter. I'm not really a Sunset Strip rocker, even though we cross over into straight up hard rock."

As for what it was like to jam with the Prince of Darkness, Wyse admitted, "I was not there while he did vocals, but when we did work as a band and heard how he would hit notes on the tracks, I'd get shivers. Not in a starstruck way, but I was amazed at his quality of tone, pitch and wittiness." And for those keeping score at home, The Cult will be touring and working on a new album, as well.