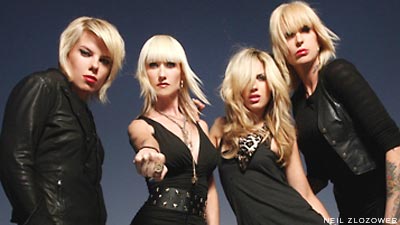 In the rebel spirit of the Runaways and Wendy O. Williams, the Los Angeles music scene has birthed the Chelsea Girls. Comprised of Allison Robertson (the Donnas) on guitars, Corey Parks (ex-Nashville Pussy) on bass, Samantha Maloney (ex-Shift, ex-Hole) and former Playboy model and hot shot DJ personality Tuesdae on vocals, the combo has quickly built a fierce reputation through their pristine performances, larger-than-life personalities and sexy stage show. Since their start in 2009, they've also made quick believers out of hard rock legends like Lemmy Kilmister and Slash, among others.

The Chelsea Girls play everything from vintage Judas Priest and Metallica to staples from Heart and Quiet Riot, but they always manage to put their raunch-n-roll signature all over everything. 2010 should be a busy year for the ladies with more live shows and private appearances. Noisecreep spoke with axe queen Robertson about the band and how they came to be.

How did the idea for the group come together initially?

Originally I got the call from Samantha. She had already been approached by Corey, who had been wanting to put together an all-female cover band for a while, inspired by several cover/tribute acts here in town, but with a few original twists in mind. She was hoping to get her ideal top choices for group members at the time and the concept of the group seemed to depend more on who was in it and the musical personality of the members as opposed to being married to one genre or dependent on gimmicks, although gimmicks are always welcome (laughter).

The members of the band have been around for years in other, higher profile acts. Did the artistic freedom and independence of being away from a big label make the project all the more fun?

Yes, definitely not having to worry about writing original material for a project with the pressure of a label of any kind breathing down your neck is very appealing to someone like me who has been dealing with that kind of stuff for 16 years plus. Playing covers is a win-win situation, because the songs are already hits, and that part's not where our work is cut out. It's all in the presentation, which is a whole other ball game.

Your set lists include the kinds of rock and metal anthems most people would be familiar with. Do you ever slip in some lesser-known songs and how tough is it agreeing on what you end up playing?

We've always experimented with a few oddities and what I call 'deeper cuts' since the first show. We usually try to brainstorm new ideas for the set list every month, and we all have different taste. So seeing what songs make the cut is always surprising. Some songs may be more than one member's least favorite song on earth at first, and then go on to become a favorite for all of us as a result of the crowd reaction or the chemistry we bring to it onstage. We tried 'Burning Up' by Madonna and some people seemed confused, some people liked it. We did the Beatles' 'Helter Skelter' at the last show, and it went over so well it became my new favorite!

Which songs are surefire crowd pleasers when you play out?

Metallica's 'Master of Puppets' was an experiment that ended up becoming a staple. We play it at every show, even private parties! You can usually count on 'Mother' by Danzig, anything Judas Priest, Dio's 'Holy Diver' and Heart, being popular with most crowds.

You've been playing in Los Angeles, San Diego and Las Vegas. But are there any plans on taking the show around the entire country or overseas?

We will definitely play just about anywhere if it's the right fit, so send in the offers!