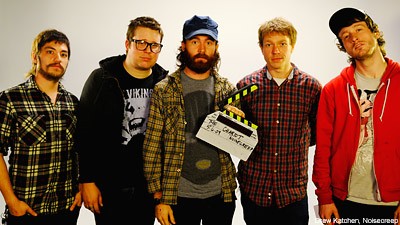 It was shortly after midnight on May 5, and Christian metalcore act The Chariot were racing down the highway, in a rickety, ramshackle van, on their way to the next stop on their tour with Gojira and Car Bomb. Frontman Josh Scogin, who is the band's sole remaining founding member and Norma Jean's former singer, got a little too excited.

"We started celebrating in the van," Scogin told Noisecreep recently, "because we were excited the CD was coming out, somewhere." So, Scogin did the only logical thing... he lit off some fireworks, inside the speeding van.

"It wasn't just, like, a bottle rocket," says bassist Jon "KC Wolf" Kindler. "It was like a full-on...I don't even know what you call them, but man, like sparks and colors and little fireballs were flying out. All over the place. In the van. Everyone's, like, jumping to the back of the van. I was barefoot and like the little sparks were just attacking my feet. We have video footage, where you just like my feet just hanging there and sparks and fireballs hitting them."

The entire vehicle was illuminated with explosions and piping hot embers as it tore down the highway, and the cabin was completely clouded with smoke, Scogin says, before blaming his favorite soft drink for the move.

"I had been off Cokes for over a month," he recalls. "I was drinking Cokes and one thing led to another and next thing I know, I got a lighter in my hand and a firecracker in the other hand and I'm like, 'Well I can't not.' It's not a good story to be like, 'We almost lit it,' and so, I lit it. Don't ever do that, kids. Don't ever release a CD on Cinco de Mayo and drink Cokes."

This summer, you'll be able to catch The Chariot on the "Scream the Prayer" tour, with Haste the Day, Oh Sleeper, Gwen Stacy, Project 86, Sleeping Giant, and Plea for Purging, among others. Scogin and the boys are looking forward to the trek, he says.

"I am really impressed with the lineup," he says, "so, I can't be more stoked for it, for sure." The tour gets underway on June 26 in Louisville, Kentucky, and runs through August 2 in Baltimore.