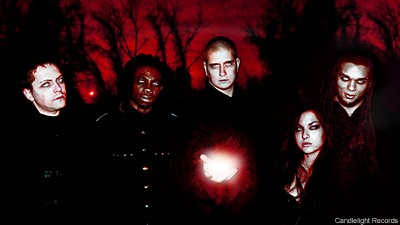 For a spell there, Connecticut death metallers the Breathing Process were being falsely characterized as deathcore -- even metalcore. That really, really pissed guitarist Jordan Milner off, because, if anything, the band is black metal with melodious, symphonic elements. And on their forthcoming LP 'Odyssey (Un)Dead,' the Breathing Process honor their many influences (including Opeth, Emperor and Meshuggah), forever shutting the yaps of those vermin who kept tagging them erroneously.

"I'm not saying deathcore is simple, but we spent time trying to step away from that label, because it's just not us and we don't want anyone thinking it's us," says Milner. "We're trying to push the sounds of the bands we were influenced by, like Decapitated."

But the Breathing Process also cite, if you can believe it, 'Mega Man 6' in their long list of influences. And it turns out that was no joke. The band is "very influenced by video games. We're all very avid gamers, and we all log a lot of man hours in front of the Xbox and PlayStation. But if you listen to the music from games like 'Castlevania' and 'Mega Man,' they're all metal as f---. You play those games long enough, and take all these epic quests, it bleeds into your music."

You'll hear it on 'Odyssey (Un) Dead,' which drops in March. The disc is a concept work that picks up where their full-length debut, 2008's 'In Waking: Divinity,' left off.

"We wanted to shy away from the whole end of the world concept, because everyone and their mother does that nowadays," explains Milner. "Our records follow a fictional story that mirror with real life, if that makes sense. This album is about worldly environments,: oceans, deserts, forests. Each one represents a different emotion in humanity. The desert, for instance, expresses isolation and death."

The fictional story follows three characters, a man Legion and two women, Antigone and Pandora, as they journey to exile through all of these various environments. "It's about battling your inner demons and finding out what happens at the end," Milner says, adding that the concept will likely carry on through subsequent LPs.