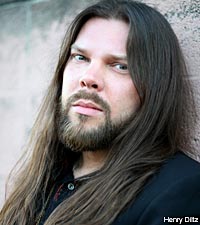 Ace Mark from Bigelf is currently on the road with the Progressive Nation 2009 tour with Dream Theater, Zappa Plays Zappa and Scale the Summit. He hates people who write about themselves in the third person.

Winnipeg, Manitoba
After a dreadful 24-hour drive from Toronto to Winnipeg, we finally got to the Burton Cummings Theater. It's truly amazing how a nice cold shower and decent food can make your day ... We were late as usual, but luckily for us the schedule had been pushed back by one hour. Despite all the stress and hassle, the show went really well, and the crowd was amazing. After the show it was time to start heading for Calgary, Alberta.

Calgary, Alberta
The MacEwan Hall is located at a university campus in Calgary. The hall was all concrete and steel, a sound engineer's nightmare. Thankfully, a lot of people showed up and made the sound a lot better. The sound check was ... interesting. I was exhausted, and half of the other guys were struggling with some kind of bacterial flu that's been bugging just about everybody but Damon and me on this tour. By some miracle, the show sounded good anyway, I guess you never know ... After he show, it was time to explore the nightlife of Calgary, this time on our own since the Zappa bus had already left for the next show.

Edmonton, Alberta
I was curious, having never been to Edmonton before. Mike Portnoy came to hang on our bus for a while and played some songs by his side project Transatlantic, really good stuff. Their album is coming out in October if I remember right. The venue was nice, it had showers and one of the better caterings on the tour, and a whole lot of amped-up Dream Theater and Zappa fans. All in all, the odds were looking good. And sure enough, it was a great show with an amazing reception from the crowd. A bunch of people came to see the show both in Calgary and in Edmonton, hats off for the dedication guys!

Right before Dream Theater went on stage, James La Brie went out of his way to shake my hand and tell me how much he loved the show and our band. That made me feel really good. What a great bunch of guys. Even though they're huge rock stars they've managed to remain down to earth and totally cool. After the show we went to this rock bar, and were an hour late from the bus, which was supposed to leave at 2 AM. It was just too much fun, and too much rum and coke ... Oh well, after a bit of drama the right words were said and apologies were made, and the journey continued towards the U.S. border.

Minneapolis, Minn.
Minneapolis, the home town of Prince ... The Orpheum is right next to downtown, surrounded by historical theaters and restaurants. Before the show, I took a walk in the downtown area and used the opportunity to finally do some laundry. The show was good, and aftershow party was even better. Good times and lots of free drinks, you gotta appreciate the Minnesota hospitality!

Milwaukee, Wis.
The Riverside Theater is an old beautiful building by the river (as you could probably guess), surrounded by an endless amount of restaurants, bars and breweries. The show was good, despite me having some problems with my pedal board. As usual, we dived into the nightlife of Milwaukee with the Zappa boys. What would we do without them?!?

Chicago
Sweet home, Chicago ... We had plenty of time, so I took a long walk in the theater district with Duffy. We played a good show at the legendary Chicago Theater, received a standing ovation and did some signing. After the show Portnoy introduced me to Charlie Benante from Anthrax, a really cool guy. I hit him up with some CDs and let Mike and him continue their drummer talk. After watching Zappa's set (which featured Portnoy playing drums on Peaches En Regalia) we went to the House Of Blues with the boys. Zappa's band was absent again, their bus left right after their show. A major bummer. We had some dinner, dug the live performance by Guy King and had a beer or ten. After the huge drama of getting the bill paid, one of our techs puked in the bus. What a night.