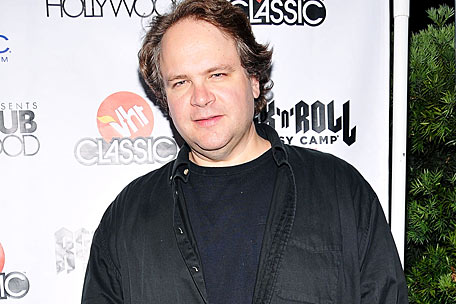 Kirk Hammett will be the special guest on the season premiere of VH1 Classic's 'That Metal Show,' which airs on Saturday, March 18th at 11 p.m. EST. The show, now in it's seventh season, is hosted by loveable metal scene know-it-all Eddie Trunk along with metal-worshipping comedians Jim Florentine and Don Jamieson.

Hammett was a big "get" for the show's hosts, who've been chasing members of Metallica since the show debuted. Apparently, Trunk managed to lure Hammett, who doesn't own a TV, with an obscure classic metal guitarist serving as bait.

"I had to finesse Kirk to do the show, since he lives in Hawaii and is surfing," Trunk told Noisecreep recently. "I emailed him for a month, telling him to get off the surfboard and come to LA and tape. How I [convinced him involved] a relatively obscure guitarist named Uli Jon Roth, who was the guitarist in the Scorpions in the 1970s. I knew Kirk was a big fan of Uli, so I said if I could get the second guest be Uli, would he do the show? Kirk said, 'That would be awesome,' so I reached out to Uli, who lives in Germany, and he flew in for it."

What happened off-camera the day of the show was something pretty amazing that most Metallica fans would probably never imagine. "Kirk arrived to the taping and the first thing he did was go into Uli's dressing room with a guitar case, and close the door," Trunk said. For 20 minutes, there was nothing. No cameras were permitted and Hammett did not emerge. "We thought, 'What's going on in there?'" Trunk recalled. "Then Kirk came out, shaking his head. Then he goes, 'Oh my God, Uli gave me a lesson. It was the coolest thing ever.' Here is one of the biggest metal musicians on planet, worshipping at the feet of the guitarist we brought in for him!" Apparently, no one on set actually witnessed the lesson.

At dinner that evening, Trunk learned that Hammett had never even seen an episode of his show, simply because he doesn't own a TV. Trunk said, "He had heard about the show, but he never saw it because he doesn't watch TV. He has two young kids and he lives on an island. It's lifestyle thing with his wife."

Watch a clip of Trunk's interview with Kirk Hammett below.