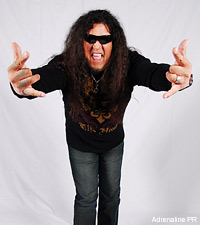 Considering that they had played nearly 200 shows to support 2008's 'The Formation of Damnation,' Bay Area thrash veterans Testament were looking forward to getting off the road and back in the studio to record their next disc. In early November, vocalist Chuck Billy, guitarist Eric Peterson, bassist Greg Christian and drummer Paul Bostaph entered the practice space to started banging out riffs.

But no sooner had their amps heated up than they got a call inviting them to head back out on tour in early 2010 with Slayer and Megadeth, resurrecting -- with the exception of Suicidal Tendencies – the lineup they toured with in Europe on the legendary Clash of the Titans bill.

"We had planned to take five months off, or at least until we finished the record before we went back on the road. But when this tour offer came up, of course we said yes," Testament vocalist Chuck Billy told Noisecreep. "To get the opportunity to play with these guys again after 20 years was an offer we couldn't refuse."

That doesn't mean Testament are going to wait until mid-2010 to continue working on their next record. For the first time ever, the band will stock its bus with recording gear and attempt to write 'n' roll.

"We ripped out the whole back lounge of the bus and we set up all these electronic drums," Billy said. "Everything in there is in our own world in headphones, so there aren't any loud amps or anything. And we'll just jam in there and come up with ideas. Plus, there are at least two days off a week on this tour, so we'll have two days sitting around the hotel to go on the bus and work."

So far, Testament have written two full songs and have dozens of new riffs. And they've done it all without lead guitarist Alex Skolnick, who couldn't join them because of his winter commitment to the Trans-Siberian Orchestra, but he's eager to contribute to the songwriting during the American Carnage Tour. Even with the road delay, the band hopes to be ready to start recording with co-producer Andy Sneap by April 2010. And Billy is the first to admit that Testament have got the bar set pretty high.

"It's tough because you always want to do one better than what you did last time," he said. "I'm more picky about what riffs we want to use and play because there are a kazillion things that could just get lost as being a thrash riff. I'm looking for something that's thrashy and catchy. I want something with a hook, something that moves me, so that's what we gravitate towards. But we're really confident right now and we have no doubt that we're gonna be able to create another killer record."