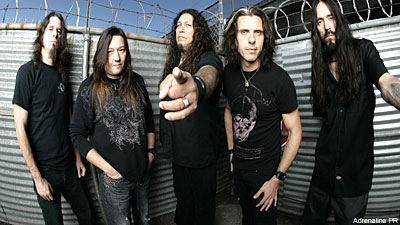 It's time to rejoice, since Nuclear Blast Records is launching its 'Rock Band' Network for all 'Rock Band' XBox 360 network users -- aka gaming nerds -- that love metal, and there is no shame in that. Music from the Bay Area factors heavily into this first round of songs, including Testament, Death Angel and Exodus. Arsis, from Virginia, and Meshuggah, from Sweden, are also included for your rock 'n' roll simulation needs.

"I'm actually very excited that our style of music is getting access to a younger generation, and it excites me to see us involved in the future of our music industry ... the possibilities are endless," Testament's Chuck Billy told Noisecreep.

Don't see a song that your particularly want? Well, there's an easy solution for that. Metal fans are encouraged to submit artist and song requests for 'Rock Band,' as well. This is the initial round of the label's songs available for the 'Rock Band' Network. All Nuclear Blast tracks that can be purchased for game play are below:

Arsis -- 'We Are The Nightmare'