Act I: Live in Rosario, the first-ever live solo offering from famed Finnish songstress/former Nightwish soprano, Tarja Turenen, was released just a couple of weeks ago. Available in 2-CD, 2-DVD and Blu-Ray formats, Act I was recorded and filmed with 10 HD cameras at the breathtaking Teatro El Círculo in Rosario, Argentina earlier this spring.

The collection boasts an elaborate track listing of solo tunes, Nightwish classics and various covers including a rendition of Andrew Lloyd Webber's "The Phantom of the Opera," Gary Moore's "Over the Hills and Far Away," Whitesnake's "Still Of The Night" and a variety of video extras.

Noisecreep has the pleasure of speaking with Turenen about the release, and whom she'd most like to sing a duet with, among other things.

Tarja, congratulations on the impressive new release. You must be very pleased with the final product.

Very much so. I was very excited to release this because it really represents such a range; just so many things that I love from the course of my career, mixed in with some personal favorites as well. A collection like this really allows me put something together that touches lots of different eras for me so in a way there are lots of memories, too, and that is also something that makes me happy; all of the memories the songs contain.

Early on, your voice was too developed for acoustic music. Was that why you ended up in metal?

I think so. As you say, my voice was pretty powerful and just really big. So when you know something is big, metal is the perfect framework for that. And that of course, that same time, when we realized that, was when we started Nightwish.

But you still find time to sing classical and other styles.

Oh absolutely. I love metal very much, but I also enjoy other styles and also when I do non-metal sorts of projects, it helps me when I get back to metal because I have learned something new that I can apply. You never stop learning as a singer, or at least you shouldn't. I also still attend a lot of theater, just like I did when I was a young girl, because that's really where I learned to sing, at the theater. I can learn today just by watching so many of the great theatrical performers around the world.

Do you get many young women coming to you for advice today?

I do, all the time, and I love that. For one, the fact that I am a female metal singer makes me sort of unique, so there are things about the business that I can share that I hope are valuable. It can be tough being one of the few females out there singing this but again I have learned a lot and I like to share that. But I also have some students I help in terms of signing, the technical parts, and that is very rewarding for me as well. I always believed that you have to be a good teacher, especially if you have some success at what you are doing.

Is there one singer on earth you'd like to duet with if you had the chance?

Does it have to be metal?

Okay. I have to say Peter Gabriel. To me, he is just a phenomenal singer and artist. He puts so much emotion and feeling into what he does, and that has always been a dream of mine.

Have you ever met him?

I did! But I did not tell him I wanted to sing with him. I would be too nervous to tell him that. But maybe some day [laughs]. 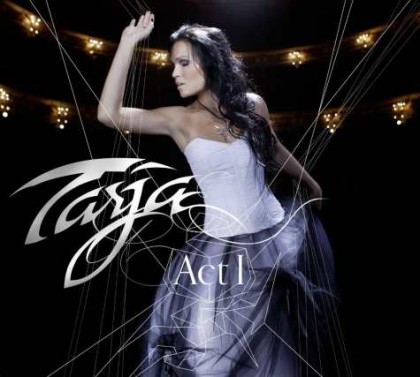 Tarja's Act I: Live in Rosario is available now on iTunes and Amazon.