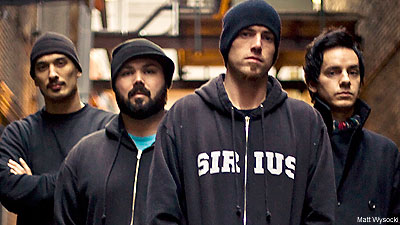 This spring, Taproot return with their fifth studio set (and Victory records debut) 'Plead the Fifth,' an album the band's in the midst of recording at this very moment somewhere on some farm in Sullivan, Mich., with producer Tim Patalan. Noisecreep recently caught up with Taproot guitarist Mike DeWolf to chat about the follow-up to 2008's 'Our Long Road Home,' and Mike seemed a little pressed for time.

"We're trying to meet very impossible deadlines," DeWolf tells Noisecreep. "It's been stressful. Whatever. I absolutely wish we had more time, but it could be good for us. Let's see."

'Plead the Fifth,' which will likely contain 11 tracks, has to be finished as soon as possible, because Victory wants it out this spring. And with tour plans shaping up for April, the push is on to wrap things up in the studio.

"It's been full steam ahead since we signed," DeWolf explains. "Everything is going well. We're just plugging away, trying to get it done and make it as good and big as possible. We've been in the studio, officially, for a couple of weeks, and we're kind of breaking it down by doing four songs at a time, and we're just kind of completing the first batch of four. We'll start working on the next batch in the next week or so. We're pretty focused on getting it done."

According to DeWolf, the 'Fifth' will sound closer to the band's first, 'Gift,' than their last, which was progressive in nature. "We're definitely making it as heavy as possible and aggressive while still keeping a lot of the beautiful melodies and just the general beauty of things in it," he says of the forthcoming disc. "We're using a lot more of our baritone guitars, which was sort of the signature of the 'Gift' and 'Welcome' years, so that immediately makes things a lot heavier."

While 'Plead the Fifth' will be a return to the band's original sound, DeWolf doesn't discount the work Taproot's done in recent years, which tried to evolve away from heavy for the sake of being heavy. It was heavy in a more cerebral way than it was in the ear-raping kind of style. Most of the band's fans did not take to the evolution.

"I think it threw a lot of fans for a loop," DeWolf admits. "But at the time, we were willing to lose some people to gain some more. In general, I guess ... I don't know. But we're definitely getting back to it. I think a lot of people appreciated the progressive nature of what we were trying to do but at the same time, a lot of people are just f---ing meatheads and only want heaviness. I guess some bands are pretty good at sticking to one thing and working that their entire career. Say ... AC/DC. But that wasn't us."

He says the band has an entire concept record written that they'd written between albums, which they're anxious to someday release. What's it about? DeWolf wouldn't talk, but did promise that "it's freakin' sweet."