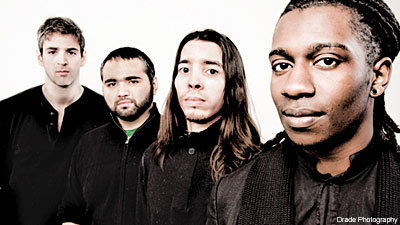 Animals As Leaders' debut album on Prosthetic Records is a adventurous foray into electronica-laced instrumental metal, off-time prog, and some acrobatic and atmospheric guitar playing from leadman Tosin Abasi. There's enough diversity in there to catch the ear of most metal fans. Tosin was gracious enough to answer a few questions Noisecreep threw his way.

Instrumental music is kind of making a resurgence in independent circles, both in the metal and indie rock scenes. Where do you think Animals As Leaders fits in?

I think Animals As Leaders is most directly going to appeal to fans of the heavier side of progressive music but there are also fans of IDM/electronica who'll find some appeal in this as well as post-bop/jazz fusion fans.

There's a video on Youtube of you doing some beautiful guitar slapping. Is that your main mode of playing on the new album? Any influences on that front?

Actually the slapping technique is kind of a new thing for me. I was first introduced to it by Evan Brewer while we were in Reflux together. He's studied a lot with Reggie Wooton who is a pretty vital source of this technique and many other unique approaches to playing. Evan ended up being really proficient at this stuff so he showed me some basics.

I couldn't really get a handle on it right away but through learning classical guitar I gained more facility in my right hand and things started to progress. Other bassists like Matthew Garrison and Hadriend Feraud have totally motivated me to move forward with approach to open handed technique.

There's a number of metal bands that employ the 8-string, from veterans like Meshuggah to newcomers like After the Burial. Do you see the 8-string becoming a standard anytime soon? How do you think it can expand a guitarist's horizons?

The 8 string guitar is definitely an affront to most ideas of what a guitar should/can be. I think most directly because it has such an extended lower range it can potentially conflict with other instruments/frequencies delegated to be in the lower register (I personally drop my 8th string to E which is the same pitch on a standard 4 string bass).

For this reason and many others, I don't really see it becoming a standard for guitarists. Also, most guitarists cling to an established norm whether it's thinking that guitar design was epitomized by the fender Stratocaster, or that digital amplification is the devil, most new additions to the world of guitar are dismissed.

I personally choose to view the guitar not simply as a six stringed instrument but as polyphonic instrument with a unique advantages and limitations. Having a 7th and even 8th string ended up being advantageous when positional playing of scales and voicing of chords is concerned. Bucky Pizzarelli, and George Van Epps are prime examples of the harmonic potential of playing an extended range guitar and these guys were doing it in the 1950's and 60's. Also Steve Herberman, who currently heads the jazz guitar program at Towson University has a wealth of great approaches to re-harmonization and counter point utilizing the 7 string guitar. There are also Russian and Brazillian traditions of 7 string guitar, so by no means is it a new thing. I almost view the number of strings on the guitar as completely arbitrary. Pat Metheny, Kurt Rosenwinkel, and Allan Holdsworth all do incredible things on a standard guitar . On the other hand, there are countless bands that would be just fine playing 4 string guitars, but you don't see them complaining about having 6 strings!

I appreciate the fact that you're a virtuoso but allow the other instruments to shine and create actual songs, not just 45 minute guitar solos. Do you ever feel pressure to take the guitar hero route and make an entire album of shredding against a steady, simple backbeat, like some of the old school virtuosos?

When initially approached to do the album i rejected it. To me instrumental guitar albums were exactly what you mentioned a lot of the time and I personally felt more content in the band context I was in at the time. Upon deciding to do it I definitely made an effort to incorporate elements that I love from multiple genres of music, and maintain a level of interest in the songs that transcended the fact that they were composed primarily on the guitar and that no human voice was present.

Do you ever wish you had added vocals to the tracks because there's something really wanted to express, that the music didn't? Are there any lines bouncing around that could appear in some form or another in future songs/releases?

I think making a composition feel like a "song" is often times a lot easier when there is the focal point of a vocalist. People truly identify and empathize with the human voice and so to remove that is to remove a lot. Obviously you can convey an idea explicitly through lyrics and so without words you're left in more subjective territory. I think Animals As Leaders is best suited as an instrumental band but i have projects in the works that involve vocalist.

Playing the way you do can get physically demanding. Do you have any rituals or routines you go through before you record or play live?

As far as practice routines are concerned, I'm a lot less regimented than i used to be. Most of my technical facility came from a time in my playing where i felt it was really important. Technique can merely facilitate expression of an idea physically, but isn't a complete prerequisite for creativity.

A lot of the music that moves me the most has no guitar anywhere near it and so I had to figure out what those elements were and try to cultivate them in my own playing.

When I do practice I am a lot more harmonically motivated than used to be. I like to think of unique chord voicing and progressions and then incorporate various techniques to add rhythmic variation or texture. That being said. Playing the guitar for me is a physical act and so it cannot be approached with disregard to that. My 8 string has a 30" scale length and so if I'm not warmed up and stretched I can end up with some pain in my hands from the added length and string tension. I'm also a big fan of the metronome whether it is used to improve speed or simply time/feel. I make sure to always have one in my guitar case!

Download Animals As Leaders Songs
Filed Under: 909397, animals as leaders, AnimalsAsLeaders
Categories: Interviews
Comments
Leave A Comment
Back To Top