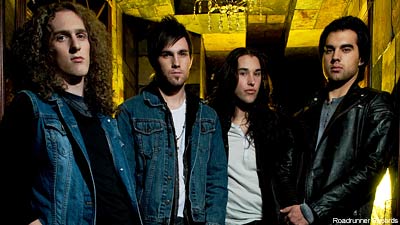 "If anyone put us as a glam band, I'd have to jump off a roof. Head first. I'd put on a Bang Tango T-shirt to make sure there's blood all over it. I'm not a glam guy," Babbitt tells Noisecreep a little over-dramatically. "I like Def Leppard, but they're not glam. The only glam I like is T. Rex and David Bowie. A lot of the '80s hair stuff, some of it I adore. Some of it I think is embarrassing, musically."

And so begins a complex conversation with Babbitt about the band's sound, image and hopes for the future. If you don't know Taking Dawn, odds are you will soon enough. The band is signed to Roadrunner Records and will release its debut, 'Time to Burn,' later this month. If you're headed to this year's Download Festival in the U.K., you'll also see Taking Dawn rock the main stage.

If Taking Dawn are wrongly called 'glam' or ''80s,' it's because of their penchant for big harmonies and big guitar solos. Unlike most bands these days, Taking Dawn has two lead guitarists.

"It's not the palette to have two lead guitarists who can shine. I wouldn't want to make music that didn't have s--- I want to listen to. A lot of underground bands have two great guitarists, but they don't have great songs. Or when they do, they kind of hinder what great guitarists can do. I didn't see why we should have any limitations," concludes Babbitt.

Taking Dawn is currently on tour with Theory of a Deadman, Halestorm and Adelitas Way.