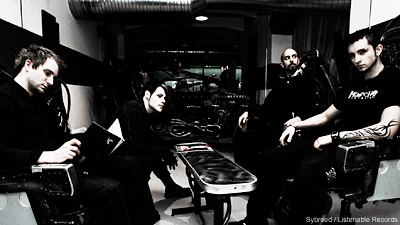 Sybreed, who are in the studio working on a new opus, are what's deemed "death wave." Drop, guitarist for the Swiss industrial metal band, told Noisecreep that the genre "is simply a mix between death metal and new wave" that was actually christened as a joke and was a result of the consumption of libations!

"We were doing an interview with [vocalist] Ben on a French radio station, and they provided us with a lot of booze," Drop said. "After a few drinks, when one of the hosts asked us how we would describe our music, we just replied something like, 'It's f---in' death wave, man.' The day after, when we thought about it while sober, we found it was a good way to define our sound after all!" Touché!

Currently, Sybreed are working with Rhys Fulber, of Front Line Assembly and Fear Factory fame. "He is a really nice and professional guy," Drop stated. "For the time being, the mix is not fully finished, but it already sounds kick ass. He is doing some more arrangements and synth work. He's adding the 'Rhys Fulber touch,' which we all like in the band. It's exactly what we expected ... even better."

Like so many cyber-metal, crunchy, industrial bands before them, Sybreed are quite fond of remixing their songs. As to why the phenomenon is so embraced by this community, Drop said, "It could be because metal fans think it's a shame to listen to techno music! But when a techno song is a remix of their favorite band, with the screams of their favorite singer and the crazy riffing of the guitarist, they can't do anything but like it!

"We love to listen to remixes mainly because we are fans of electronic music and some remixes really kick ass, sometimes more so than the original version. We have some of our songs remixed by artists who are friends, and we'll surely go more that way for the future. There's something for everyone to participate and crush with in Sybreed's songs."