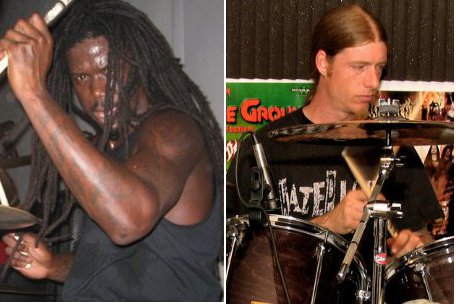 Suffocation drummer and founding member Mike Smith has left the band. The skins smasher's rumored departure was confirmed in an email interview the band conducted with HitKiller, a Russian site.

When asked about Smith's exit, the band responded diplomatically, saying, "We want to keep this respectful, so without going into much detail, Mike and the rest of us had serious differences of opinions. Mike did formally resign from the band, and he has since been replaced with Dave Culross who had played and recorded on 'Despite the Sun.'"

Culcross has also played in Malevolent Creation, Incantation, Hate Plow, and Gorgasm. The band was also quick to confirm that despite the loss of Smith, who played drums for the band from 1989 through 1994 and from 2002 through 2012, Suffocation will not be splitting up.

The band wrote, "For all the people who think the band is splitting up, it's NOT, except for the one change we already mentioned above. As far as our next move, the new CD is in the pre-production stage and it kills! We would say some of the best material to date. The band right now as a whole can't wait to get this out to our fans."

Meanwhile, Smith posted the following note on his official website, which doesn't exactly clarify the situation but certainly sounds like the chapter being closed for him:
"There are not many things related to the suffocation brand I can honestly say brings me sadness. Except, the lack of pride that exists within those who have the "right" to claim the name as their own.

This battle has been one that to any focused being, should make obvious sense but has evaded some for 2 decades. Within any foundation the weakest link will always cause all structure to crumble.

The one fact that keeps me at peace is the fact that anyone who has ever seen or spoken to me regarding Suffocation and the industry as a whole, has always left with an understanding of the level of focus and pride that I personally hold for myself, the brand that is Suffocation and the genre we influence and helped create.

As I've always said, if you are willing to put your time and soul towards anything at all as I've done within the metal community.

Be willing to speak truths, fight and bleed for it if need be. Or take your earned position in the back and wait while others do it for you."

The next Suffocation album is due this fall on Nuclear Blast.