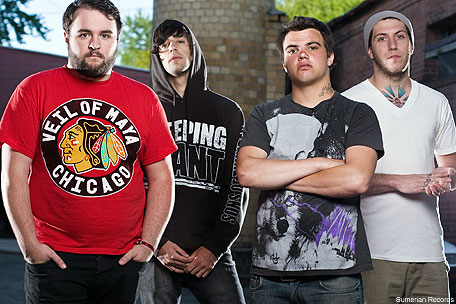 Just calling Long Island's Stray From the Path metalcore doesn't cut it. Not only does the band barrel for new grounds, musically speaking, there is a tactical anger to the foursome. True to that form the video for 'Damien' is not chock full of anti-religious imagery for no reason. This aggressive stance comes from a real event. "What sparked the idea of making this song in the first place was us seeing these people for ourselves and really how terrifying they can be," guitarist Tom Williams told Noisecreep.

"We played this one fest in Arkansas that was a huge Christian festival, and we were playing because we were part of a tour package with a Christian band that they wanted." The band received a phone call saying they would be paid not to show up. In general things like this are not totally unheard of, but according to Williams this struck a chord.


"After that phone call, we wanted to play this show more than doing direct support for the Deftones. We show up, and this guy comes up to me and points his finger at me and says, 'We are making an exception for you people, this is our festival, don't give us any problems.'

"These f---ing people have no idea who I am, or who my bandmates are, and they were so quick to outcast us. That is just so incredibly wrong, and not how human beings are supposed to coincide," says Williams. "That's why we chose those shots of people out casting homosexuals because they are not the same as they are, and how that sometimes will lead to violence."

The spliced news and documentary images breaking up the band's rooftop performance were actually not the first premise. "Well at first we were going to have actors and a story line doing pretty much exactly what is in those clips. But things didn't work out, so we had our friend/director Conor Maloney and his team (Drew Valenti, cinematographer and Andre Szabo, editor) bring up the idea of using these clips and splicing them into the video in a very menacing way."

The whole video was very DIY according to the guitarist. "We shot this video on our own, so there was basically no money for the video (I think the grand total for this video was $82). This team of people worked their asses off for us, because they believed in the band and the video."

Download Stray From the Path Songs
Filed Under: Stray from the path, StrayFromThePath
Categories: Exclusive, Interviews, Videos
Comments
Leave A Comment
Back To Top