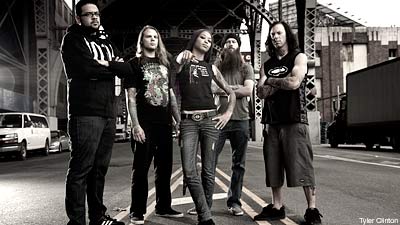 Alexis Brown of Straight Line Stitch checked in with Noisecreep while her band was working on their next album for E1, which is due out sometime this summer. "We'll be in the studio for approximately two months, give or take, because you never really know. We'll be working with both Paul Trust in Forida and Dave Bendeth, who's worked with Breaking Benjamin, Paramore and many others, in New Jersey.

"We've basically got a ton of ideas, as we're all inspired by so many things which collectively help define the SLS sound, from riffs to melodies and song lyrics, along with a little of this and a little of that." Brown admitted that the band is "very anxious about this upcoming record" and that they are "striving to make this record better than 'When Skies Wash Ashore,' which our fans really supported and loved. We definitely want to please our longtime fans and hopefully make new fans in the process. But ultimately, this time around, we also want this record to be something that breaks new ground and take us even further."

Those are lofty and realistic goals to keep the band fresh and determined, and while two months may seem like a long time in the studio,it's really not an eternity. Brown sees it as all part of a necessary creative process. "My favorite things about recording is bouncing ideas off of each other and our producer," Brown, who attends church every Sunday, said. "It inspires me and I love how they push me to be better than what I think I am. I definitely write in the studio because when we record the music, it's always changing and that sometimes means the lyrics have to change as well. Often, in the studio, while the rest of the band is tracking their parts, I do sometimes find myself alone, and it's cool because I get to just think about my life: the good, the bad and the ugly."

The band will also shoot a video for the older track 'Never See the Day,' from 'When Skies Wash Ashore,' with up and coming director Jeremy Williams. It'll be the sixth (sixth!) video they've done for the album so far. The hungry Williams was persistent with the band's manager Dale 'Rage' Resteghini -- a noted video director himself, and probably the reason the band has done so many videos -- about lensing a SLS vid.

"Apparently, he kept asking Rage for over a year if he could direct a video for us," Brown revealed. "He is a huge SLS fan and well, our manager is a perfectionist, and I mean in the best way possible. And he just wouldn't let any old person work with us, so apparently Jeremy, for over a year, kept asking and finally Rage asked what could Jeremy bring to the table. Ultimately, Jeremy told Rage how he was gonna shoot us, and he got this great location. So eventually Rage said, 'Yes.' And that's the story."