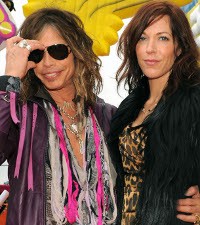 Is Aerosmith's Steven Tyler's relationship with his fiancee Erin Brady on the rocks?

According to New York Post's Page Six gossip column, the couple has officially broken up.

"It's over for good this time," a source tells the paper. "They're still friendly, but they're going their own ways. The engagement is off."
The source gave a reason for the split, explaining, "Steven was just not that nice to her in the end. His family and entourage never really accepted her and she can do better."