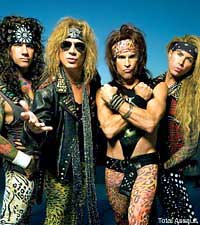 It looks like 2009 is shaping up to be Steel Panther's year. Not only are the gods of the Sunset Strip releasing the long-awaited 'Feel the Steel' via Universal Republic on October – we mean, Rocktober 6 – they'll also be continuing to tour and making television appearances throughout the remainder of the year. But in what may be the classic rock/hair metal combo of the century, Steel Panther have just announced that they will be opening up for ZZ Top for two UK shows at Wembley Arena and Wolverhampton Civic Hall. The shows will take place on Oct. 27 and 28, respectively.

Steel Panther played a buzzed-about set at Download Festival this year, and they've been turning heads with the soon-to-be-classic videos for the recently released 'Community Property' and 'Death to All But Metal.'

In a recent interview with Noisecreep, lead vocalist Michael Starr told us about the writing process for the latter track. "It was written by Satchel," the frontman said referring to his guitarist. "He writes pretty much all the songs so I can hang out. I get all the clothes made, the outfits organized for photo shoots. That's what I write. That's what I create, because it's really a lot to take on to write and do the costumes, so I just choose to remain anonymous when it comes to that." Hey, at least he's honest.