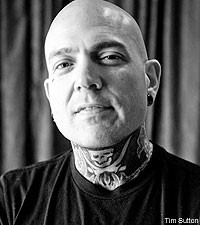 Evan Seinfeld, perhaps best known for his adult film career and former marriage to starlet Tera Patrick, his role on HBO's now-defunct 'Oz' series and for being the singer and bassist for iconic Brooklyn band Biohazard, is a busy man. In addition to his writing and 'acting' careers, he's also got a classic rock band called Spyderz and is working on the band's debut album, which is being co-produced by Biohazard cohort Billy Graziadei.

Seinfeld detests what rock music has devolved into: away from the sex, drugs and hot chicks and towards a whiny, wimpy, outcast-riddled genre. He is angered about why this happened, saying, "It's OK to be cool. Don't apologize for that. If you are in a rap band in America, you could have a thousand 'b----es' in your video and that's OK. And if you are in a rock band and you have chicks in video, you are considered a cheeseball! My kid is 15 and plays guitar, and now he wants to rap and I was like, 'Why?' He said, 'Rappers get girls and rock dudes don't!'"

Seinfeld was quick to set the record straight, saying, "But rock dudes do. You have to apologize for being successful. MTV f---ed it up. Now no one looks at the camera, everyone is pseudo-politically sympathetic to everyone weepy. It's all, 'We need to hug a tree, recycle, pretend we don't f--- or do drugs or party.' It's the antithesis of what rock 'n' roll is."

He's right -- there's not much danger in rock music nowadays, and Spyderz aim to remedy that problem. "Spyderz is the modern incarnation of outlaw-style rock 'n' roll, like Guns N' Roses," Seinfeld said. "It's good time. It's timeless, not trendy. It has a punk edge."