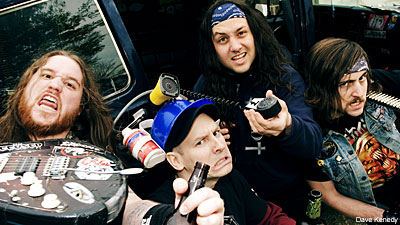 MASSIVE ALBUM DROP: Richmond, Virginia's Municipal Waste have recently announced that they have made the halfway mark recording their upcoming album now titled 'Massive Aggressive' on Earache Records. Set for a tentative August 2009 release, drummer Dave Witte states, "This record is definitely shaping up to be the best we've done easily, I've already banged out all my tracks in 1 & 1/2 days and am totally pleased with the outcome... I think our fans are going to be psyched with this record and I can't wait to play these songs live!" Dave, we're just as excited to hear you guys perform these live as well.

TOUR RITUAL: For thrashing newcomers Mantic Ritual (formerly Meltdown) the open road is certainly treating them well. As support on the current Destruction and Krisiun tour, the boys share their highlights of the tour thus far along with an interview from a recent show in Montreal. Their debut album on Nuclear Blast Records titled 'Executioner' released this past week and their current tour run will last until early April. I'm predicting this spring and summer Reebok high tops will be the new "black".

GOING BACK INTO THE PIT: Just announced this week, Oakland, California's Testament will be kicking off a headlining tour starting May 2 with Metal Blade Record's Unearth and Lazarus A.D. Vocalist Chuck BIlly commented, "It was really exciting last summer touring with Judas Priest, Heaven and Hell, and Motorhead, playing in front of all the old-school as well as new-school metalheads. Now we look forward to CRUSHING on our first headline tour on the Damnation Vacation US run. Heavy metal forever!!!" Pre-sales for the tour were announced today and tickets are available online right now. Act fast though! Pre-sales will only be available until 10:00 PM Thursday March 19. The password is "damnation."