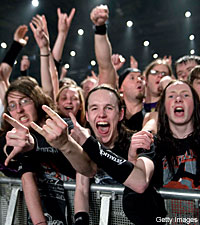 SHEER MADNESS: For the long time thrashers in Death Angel, they'll be joining labelmates in Kataklysm and Keep Of Kalessin later this month for the European "Summer Madness Tour". The tour will kickoff on June 22 in Pampalona, Spain and continue until July 15 where the tour will end in Tokaj, Hungary. As footage from the tour will begin to surface online, Noisecreep will be posting updates for you.

A VINYL HOLOCAUST: With a release date set for July 21, Relapse Records' Toxic Holocaust are releasing 'An Overdose Of Death' on 12' vinyl. With pre-orders already out of stock, the vinyl available in its second pressing is limited to 500 pieces in 180GM vinyl, and 500 additional pieces in purple vinyl.

THRASH 'INFIDELS': After a 20 year hiatus, Virginia metallers At War have announced this past week that they will be releasing a new album titled 'Infidel' this August from Heavy Artillery Records. The New York label being home to other extraordinary acts including Exmortus recently signed the band this past year and summer festivals are being planned to immediately follow the album's release.