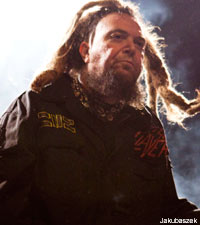 A long time ago, when he was still in Sepultura, Soulfly frontman Max Cavalera bought a spooky looking mask during a visit to his birth land, Brazil. When he and his wife got back to their home in Phoenix, they decided to hang it on an empty wall. Then, they stepped back and examined the piece with a critical eye. It looked good, but lonely.

"We thought, 'Let's cover the wall with masks from around the world,'" Cavalera tells Noisecreep. "So now, whenever I go someplace and I see a mask I like, 'I'll buy it and put it up on the wall.'"

Over the last decade, Cavalera has bought more than 30 masks to mount on his wall. His most recent find was in August when he was in Osaka with Cavalera Conspiracy. "I got some kind of a Japanese demon face," he says. "It's pretty kick-ass and very exotic looking. But one of my favorites is a voodoo doll mask that I got in Africa. It's real crazy. It's got a real human skull on it."

Sepultura fans will probably be more familiar with his other voodoo mask. "It's the one we used on the 'Roots' album artwork," Cavalera says. "If you look inside the CD box when you take out the CD, it's right there. It has all these nails right on the face, on the eyes and head. It kind of looks like pinhead [from the 'Hellraiser' movies] a little bit."

Once Cavalera's friends discovered his wall of masks, finding him birthday and Christmas gifts was less of a challenge. Even his former nanny joined the mask finding crusade. "She was Mexican, and she got us one that's pretty brutal," Cavalera says. "It's a deer that was killed on the side of the road, and she had somebody build that into a piece of wood, and there's still dried blood on it. It's pretty wicked."

With over 40 masks currently staring down from his wall, Cavalera still isn't done decorating. "I'm looking forward to getting some more," he says. "We'll just have to get a bigger wall."