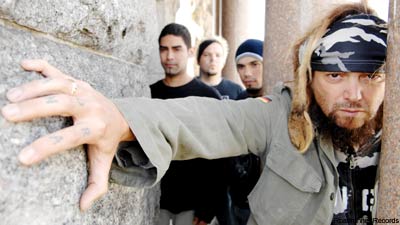 Soulfly will release their seventh album, 'Omen' on May 25, and to celebrate the end of one cycle and the beginning of another, they'll head back on the road with their good friends Prong, who they toured with last October. Dates run from March 2 in San Antonio to April 1 in Reno, Nev.

"I'm really excited for the next Soulfly U.S. and Canada tour," Soulfly frontman Max Cavalera told Noisecreep. "It's the final leg of the 'Conquer' world tour, and we will also be playing some new stuff out of the new album."

"I am so excited and grateful to have the opportunity to tour with Soulfly again," Prong frontman Tommy Victor told Noisecreep. "The first leg we did a few months ago was a great experience, but I think the upcoming run is going to be even better. Max Cavalera and I have really enjoyed a newfound, rejuvenated kinship."

During the shows, Cavalera and Victor will likely take the stage together to perform 'Lethal Injection,' a track they recorded for 'Omen.' "We hope to join forces with Tommy and jam," said Cavalera. "So let's all bring the s---."

"I can't wait to jump on stage and do the duet with Max on this tour," added Victor. "I'm very happy about the whole thing. Its extremely inspiring for me to see all the veterans like Max out there still playing and not giving up."'

Joining the two veteran bands on the road will be Incite, which features Soulfly frontman Max Cavalera's son Richie, and Dallas '80s thrash veterans Rotting Corpse, which will be embarking on their first major tour since 1990.

Soulfly will shoot a video for the 'Omen' track 'Rise of the Fallen' next month. The track features guest vocals from Dillinger Escape Plan vocalist Greg Puciato. Cavalera previously told Noisecreep that "'Omen' Is "in the same vein as 'Conquer,' but more energetic. The songs will be a little faster and shorter too, so it will be more aggressive and more in your face."

The album was produced by Logan Mader, who produced 'Inflikted,' the debut by Cavalera's other band Cavalera Conspiracy. The cover art for 'Omen,' which depicts the seven deadly sins, was drawn by David Ho.