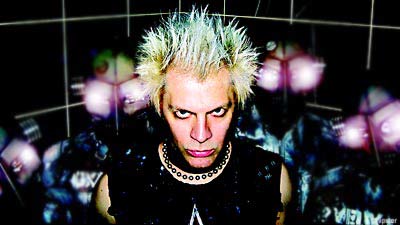 Powerman 5000 vocalist Spider One admitted his band has sort of veered away from its focus in the last few years. But thanks to the San Diego Comic-Con, Spider One and the rest of the band are back on track.

"I was there, and I realized there was such a passion for all this stuff, almost an obsessive compulsion for all this nonsense that I grew up loving and that really inspired the band in the first place – comics and movies," Spider One said during an interview with NoiseCreep. "I got this blast of energy, 'Wow, this is the crowd. These are the people who are into Powerman.' Then I realized there's no music represented at the comic-con. I realized because that's what I should be doing."

That's where the focus began for Powerman 5000's upcoming album, tentatively titled 'Somewhere on the Other Side of Nowhere.' Its first single, 'Super Villain,' is currently streaming on the band's MySpace page. Spider One, born Michael Cummings as the younger brother of Rob Zombie, calls the sound a return to that of 1999's 'Tonight the Stars Revolt!'

"I think we've become, over the years, much better songwriters," he said. "It used to be about a sound. Now it's combining that sound with actual songwriting and cool parts and changes that before I didn't care. As long as it had a big noisy sound I was into it. Now over the years I've developed a better sense of songwriting.

"But yeah, it's very much got that heavy riff, but it's very dancy. I wanted to make a party album that you'd play on the last night on Earth or something – a CD club at the end of the universe. It has that feel to it. We were listening to a lot of electronic groups while we were writing this. We'd listen to Justice and Daft Punk and go write a song while we put a box set of Godzilla movies on TV and, if our song sounded exciting while watching Godzilla, we knew we had do something right. Other people, like, need heartache and torture and break up with their girlfriends. We just watch Godzilla and Ultraman, and if it sounds cool then we're happy."

Spider One expects 'Somewhere on the Other Side of Nowhere' to be out by the end of summer via Fontana/Mighty Loud.